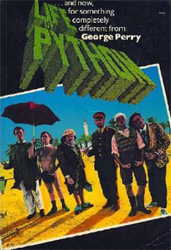 Summary: On October 5, 1969, outrageous, unorthodox comedy struck the world. It was on this fateful day that “Monty Python’s Flying Circus” debuted. From the Dead Parrot skit to the Lumberjack Song, The Attila the Hun Show to the Cheese Shop routine, the Pythons set a standard for irreverent, obnoxious, nonsensical comedy never before seen.

George Perry takes a fresh look at the past achievements of the Monty Python team, tracing their progress from student days, through the heady times of the “Flying Circus”, right up to the most recent events in their lives. Despite the completion of the fourth and final series in 1974, the Pythons have remained at the forefront of the entertainment business, spanning many different media. Their careers may change direction but all are informed by the same irreverence and humour which marked their early work.

Life of Python, by George Perry 7.5

Published in 1983, ‘Life of Python’ is a book on Monty Python by film critic George Perry, who has written books on other icons such as James Dean, Humphrey Bogart and Alfred Hitchcock. He has also written extensively on the great British studios of Ealing and Pinewood. Stocked with exclusive pictures and interviews, it covers the pre-Python days, the individual members’ projects and personal lives, as well as Monty Python itself.

The first chapter takes a look at British comedy in the years leading to Monty Python. It’s a rather thorough overview that links many comedians, comedy shows and troupes together from the post-War era onward. It’s very dry and I actually started nodding off reading it, likely because I have no point of reference and all the name-dropping was lost on me. Still for all my drowsiness, I am confident that it’s excellent source material.

The next six chapters cover the individual Pythons on a more personal level, with Python briefly being referred to. They’re like mini-biographies.

I enjoyed reading about Palin’s family life, about his relationship with his father and their financial situation, how they barely got by but his father saved like crazy (a third of his salary, reportedly) just to get him into a good school. He also talks about the influence of his childhood friends and how he met his wife. Also interesting to note is that, in 1983, Palin was confident there would be another Python movie. Alas, it was not to be.

The more I read about Terry Jones, the more I like him. He’s always been the odd one out for me, after Graham Chapman, whom I’ve come to quite like over the years. I’m starting to understand Jones’ personality more, and appreciate his bookish yet highly emotional duality. By this point, it made total sense to me to find that he thought the filming of ‘The Meaning of Life’ was a gas whereas John Cleese thought it was dreadful. Or that he says that he agrees to things easily, whereas everyone else says that he’s the most argumentative. Of course. That’s so Terry.

Terry Gilliam’s chapter is quite revealing. He didn’t just move over to Britain and called up John Cleese: he actually drove around Europe on a motorcycle and worked for various magazines before running out of money and THEN calling Cleese. Most interesting is that he worked for René Goscinny at Pilote magazine for a time. How this fell through the cracks of other bios is beyond me. Another interesting tidbit is Terry’s longest-standing British friend assessing quite well what would happen if Gilliam ever returned to the U.S. to make movies, as opposed to staying in Britain. Wow.

There wasn’t that much new stuff in the John Cleese chapter, but it was interesting to note that he was very keen on psychology and psychiatry at the time, having himself done quite a lot of work with psychiatrist Robin Skynner, with whom he subsequently also cowrote books. Cleese is probably the most cerebral of the lot, and it provided further insight into his temperament. But the biographical stuff has been explored elsewhere and more in depth.

The chapter on Graham Chapman was even more spare on detail, being by far the briefest of the lot. From reading it, one gets the impression that memory may not be serving Chapman well (his rampant alcoholism during many of Python’s most significant years may very well be to blame for this), since he sometimes recollects things quite differently from the others. Of course, perhaps he was merely saving the best for ‘A Liar’s Autobiography’.

The chapter on Eric Idle was a good read because it thoroughly enumerated all the many project that he did before joining Python, something we don’t read about. I hadn’t realized just how much he had done until now. It also serves to reaffirm the notion that he’s the group’s marketing genius, without whom a lot of their various productions would simply never have borne fruit – for good or bad, if one considers the many musical in recent years.

The final chapter preoccupies itself with the troupe as a whole and, although there’s not much that was new to me, it allows Perry to delve into subjects that he’d covered in the previous chapters to greater depth, in particular with respect to the Pythons’ individual projects. Given that the book was written in 1983, Perry could only speculate as to what the future held for the group and muse on their legacy and influence. Thus far.

Thirty years on, ‘Life of Python’ is an outdated document, but what’s interesting is that it’s a fitting tribute to Monty Python given that the whole of them never did anything else together. With Graham Chapman’s passing in 1989, the remaining members would work together on and off, but never on new Monty Python material (the exception being ‘Python Night’, which doesn’t really count because Eric refused to participate).

So, in the end, Perry’s book accurately portrays the life of the legendary troupe. There are more thorough or more detailed books, but this is a very good encapsulation of those key 15 years.