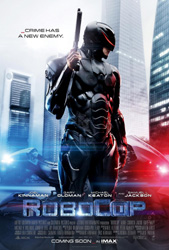 Synopsis: Crime has a new enemy in this “sleek, stylish and smart” (Silas Lesnick, ComingSoon.net) action-thriller starring Joel Kinnaman, Samuel L. Jackson, Gary Oldman and Michael Keaton! In the year 2028, greedy conglomerate OmniCorp uses robotic technology to transform critically injured police officer Alex Murphy (Kinnaman) into the ultimate crime fighter. He’s part man, part machine…he’s RoboCop! Back on the streets, Murphy is hard-wired for law enforcement, but the mind and memories of the human inside long to take over…and the results could be catastrophic.

eyelights: the update. the quality of the production. the credible performances.
eyesores: its lack of thrills. its limited satirical content.

“Americans don’t want a machine. They want a product with a conscience. They want something that knows what it feels like to be human. We’re gonna put a man inside a machine.”

When a big budget remake of ‘RoboCop‘ was announced, I immediately dismissed the idea. Firstly, for at least a decade now, I’ve been bloody sick and tired of remakes/reboots/re-imaginings. Does this stream of reheated crap ever end? Create something new, Hollywood, I say!

I also felt that ‘RoboCop’ was a product of its time, something that doesn’t necessarily translate well to the current environment – especially since much of what it forewarned has since become a reality. That the production was continuously delayed didn’t lend it any credibility, either.

I wasn’t planning to ever see it.

However, one of my best friends one day recommended it to me. Not with a capital R, but with a small r, saying that they had done a decent job of revamping the franchise. That stuck to my mind and, when I decided to watch the original trilogy, figured I might as well watch this too.

2014’s ‘RoboCop’ is a picture that is a reboot more so than a remake; it takes the original concept and spins it in a new way – as opposed to basically redoing the original picture but with a new cast and more modern cinematic techniques. In other words, it’s more like ‘Star Trek‘ than ‘Psycho (1998)‘.

The core story is the same: set in Detroit of the future, it’s story of police officer Alex Murphy after he is reconstructed as a cyborg following a deadly attack by a gang. It explores the impact of his cybernetic form on society, his fellow officers, his family and, above all, himself.

There are notable differences in this version, however:

Anyway, it makes you wonder who he is working for, whose agenda he is pushing, as he tells us that Operation Freedom Tehran (which has ED-209s and other robots occupying the city while intimidating and screening everyone as they pass by), is creating an “environment of safety” when we can see that, in actuality, it has Tehran’s citizens scared s#!tless to the point of being radicalized.

It’s a good intro to the picture, setting the stage quite well. But the picture introduces a number of new elements with mixed results:

Frankly, I was pleasantly surprised by this iteration of ‘RoboCop’. It’s a different beast altogether, but it holds up rather well. It’s only in the final act that my interest waned somewhat, with the dénouement lacking the punch you’d expect, something to make you cheer for our hero.

Still, it’s a higher quality, more realistic, motion picture than its predecessor. This is a double-edged sword because it’s more credible, but it misses the point. By being less violent and less satirical, it lacks the balance of humour and edge that made the original so thought-provocative.

But it sure beats the original sequels.

The viewing public seemed to think so too: this reboot grossed more than all of the original films combined (although, adjusted for inflation, this would skew the data). Will there be another film in this revamped franchise? Who knows. But I’d certainly be interested in seeing where they’d take it next.

As RoboCop might say to the producers: “Your move!” 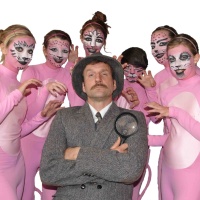 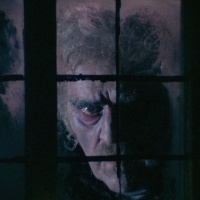 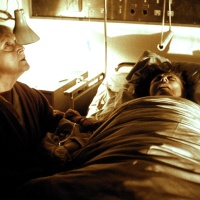 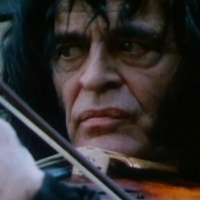