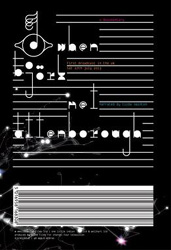 Synopsis: Originally screened in the UK on Channel 4, ‘When Björk Met Attenborough’ is a one hour long documentary which follows Björk and Attenborough as they investigate and discuss the connection which exists between music and nature. Narrated by Tilda Swinton and inspired by Björk’s technological project Biophilia, which Attenborough provided a spoken introduction for, the film is a unique encounter between two of the most iconic thinkers of our time.

eyelights: Björk. the science behind the music. the incredible contraptions invented for Björk’s album.
eyesores: the brevity and relative superficiality of the documentary.

“So much of what you do, is completely new, [and] hasn’t been done by people before, and that’s what’s challenging about that.” – Davdi Attenborough

In 2011, Björk released her eighth solo studio album (ninth if one considers her 1977 self-titled debut). Titled ‘Biophilia’, it was inspired by her love of nature and concerns for the environment. This led her to explore the relationship between music and nature, creating an album that was not just inspired by nature but that made use of some of its basic principles.

Although the album wasn’t a huge commercial success (certainly not in comparison with her mid-’90s output), it was widely acclaimed around the world. A challenging album, it pushed boundaries in the composition of music: she had new instruments invented to make it, used unusual time signatures, and even had interactive apps created to involve people in music-making.

Being a fan of hers, I naturally picked up the album in the most compelling version possible, a japanese SHM-CD edition with bonus tracks on it. I wasn’t as enamoured with it as I would be with other albums: ‘Biophilia’ is an album you need to focus on, to listen to attentively to fully grasp; it’s not something you sing along to in the shower or in your car.

But it was nonetheless impressive.

When I heard that a documentary exploring ‘Biophilia’ was in the works. I was extremely interested. And when I heard that it was made in conjunction with David Attenborough, the noted BBC nature documentarian, I was even more interested: if anyone could explore the intersection of music and nature with Björk, it would be Attenbrough.

I bought it as soon I could.

Narrated by Tilda Swinton, the 47-minute ‘When Björk Met Attenborough’ was originally broadcast on British television in July of 2013 – almost two years after the release of the album (In my opinion, this was a missed opportunity: it should have been broadcast right before the album, to fuel interest in it and the ensuing tour. Sadly, it got delayed repeatedly…).

I was especially looking forward to the dialogues between Björk and Attenborough. The meeting seemed promising at the beginning, when Attenborough started to show Björk around London’s Natural History Museum, but the one-on-one interview segments were awkward, with Attenborough sometimes rambling, leaving Björk watching, unsure how to react. And twitching.

But the documentary has so much more to it.

There was this wonderful bit on the songs of wild animals, including the lyrebird, which can imitate the most complex sounds (including a chainsaw) and the gibbon, who finds a mate and sings together. It was cute and delightful to see (I know we assign meaning to what animals do based on our own behaviour, and it likely has no romantic significance, but it was still wicked to see and hear).

I adored seeing the amazing contraptions that were invented especially for ‘Biophilia’ or that function on the principles on which the album was created. For instance, she used a sharpsichord, literally a one-of-a-kind instrument that’s a cross between a harp and barrel organ. And she also incorporated a Tesla coil to represent electricity and had some sort of string-plucking pendulum to represent gravity.

It’s really nuts stuff, when you think about it. Some of these were really far out, and it’s amazing that she sought these out and made them a part of her music. It’s extremely self-indulgent, but you can only push boundaries by chasing after hard-to-reach dreams, and Björk does that. Granted, she’s also an eccentric, but her eccentricity is used in an extremely positive way.

There was this moment when, in explaining the vibrations that music make, we were shown a device called a Chladni plate, which puts sand on a plate and then vibrates to sounds of all types to create patterns. They played some of Björk’s music to show the patterns that the songs’ vibrations created. It was beautiful, but it was even more amazing to think that we could “see” the music.

They also talked about her song “Crystaline” and how it had a mathematical basis, much like crystals do, how it has a really strange time signature, something that isn’t ever used in music. I know nothing about chords, time signatures, and so forth, but a musician friend of mine explained it to all of us afterwards. He was utterly impressed with what she’d achieved here.

Björk was very ambitious with this project: she went so far as to have apps created that would allow people to interact with music, to create music in a more intuitive way than by learning instruments. Naturally, they are all based on the songs from ‘Biophilia’, but her project was successful enough that her apps are now part of school curriculum in her native Iceland.

The documentary also takes us to the live presentation of ‘Biophilia’, particularly the opening night, which  saw the whole Graduale Nobili choir, the sharpsichord (which is extremely difficult to transplant) and all of the wacky instruments on stage together. It was an impressive sight to say the least, and one can only imagine the wonderment of those lucky concert goers.

(I look forward to seeing her ‘Biophilia’ live show, which has also been captured on film. Stay tuned.)

Music is more important than some people imagine. Attenborough points out that the human larynx has a much larger range than what is used in language and that there is a reason why we are built his way; music serves a purpose. Neurologist Oliver Sachs explains briefly how the brain is stimulated and grows when exposed to music, how it can even have a healing effect.

With “Biophilia’, Björk dared to explored the connections between music and nature, pushing the boundaries of how music is created as well as the definition of music. She has put together a gorgeous but challenging album that has its roots in scientific principles. And ‘When Björk Meets Attenborough’ explores this to some degree. It’s a truly fascinating journey.

Its only real flaw is that it’s far too short; it was merely a taste of everything that went into the making of the album. I wish that the filmmakers had spent more time explaining some of its principles and gave us more time to sit in awe. There have been rumours of an extended cut of this doc. If ever one is released, I will be the first to want to see it.

‘Biophilia’ is too important an album to not explore it as fully as possible. By virtue of this, ‘When Björk Met Attenborough’ is essential viewing.