Synopsis: An Irish funeral has a wake, a Jewish funeral has sitting Shiva, but a traditional Chinese funeral has something else entirely – which is what the estranged siblings of a westernized Chinese-American family discover as they try to fulfill their mother’s last wish. In the process, they learn more about themselves and their mother than they ever fathomed.

“I believe all of us are connected, even without realizing it. We are all ingredients in a wonderful meal.”

‘Dim Sum Funeral’ is a 2008 Canadian-American co-production that takes place in Seattle, but was mostly filmed in Surrey and Vancouver, BC. It tells the story of four distant Chinese-American siblings who come together in their family home for the funeral of their mother, the much-disliked “Dragon Lady”.

Her last request, which is read to them by Viola, the family nursemaid and caretaker, is that they hold a traditional Chinese funeral for her – a seven-day ritual that they are all very much unfamiliar with. This forces them to deal with their long-held grievances as they make preparations.

Then various family and friends start to pop up, including an older man whom no one knows, the family hires two monks to chant every day, and they start to discover another side to the “Dragon Lady” through the objects she left behind and the recollections of members of the community.

All this with the sure-handed guidance of Viola, who knows a lot more than they ever imagined.

I probably enjoyed ‘Dim Sum Funeral’ far more than I should have. I’ve read many acerbic comments about it since, and was surprised by how much dislike there is for this film. Some of the criticism is justified and some of it is absolutely side-splitting (ex: the “CliffsNotes” I found on the UCLA website)

In all fairness, I recognize that the plot is mundane, despite the ridiculous twist ending, and that the acting is uneven. But I enjoyed the set-up and the setting, liked the whimsical aspect of the piece and appreciated learning about Chinese funereal traditions (I must admit that I knew nothing going in).

I even liked the characters, who were all given their own unique challenges: the eldest lost her son, then split from her husband; the middle one was forced to turn her back on the love of her life by her mom because he is black; the youngest is a lesbian b-movie actress; the son has a mistress and marital woes.

There were amusing, if unrealistic, moments that peppered the piece, too, such as the arrival of Zhou Lin, who proceeded to gobble down a week of food and run to the bathroom, or when the lesbian couple tried to coax one of the monks into donating semen so that they may get pregnant together.

There were even lovely moments like the scene when they return from making preparations to find Zhou Lin practicing tai chi in the expansive backyard (accompanied by a hilariously stiff Viola). One by one, they join him in what ends up being an awkward group dance/choreography.

But, admittedly, aside from the B-grade acting (Tseng Chang, as Zhou Lin, is an exception), which I write off as the mark of a low-budget indie film, and the conventional aspects of the plot, ‘Dim Sum Funeral’ did suffer from some plot contrivances that simply don’t hold up under any sensible of scrutiny.

It’s funny, but in retrospect, I would probably give ‘Dim Sum Funeral’ a 6.75 now, instead of 7.0.  But I wonder if that feeling is influenced by comments that I read online. The fact of the matter is that, after watching it, it felt like a 7.0 to me (although it started as a 7.5 and gradually sunk lower as it wore on).

What ‘Dim Sum Funeral’ wants to be is a traditional Chinese funeral full of untraditional people. What it ends up being is some kind of funeral full of fairly dim people. It doesn’t repeal its minor charms, mind you, it’s just that it impedes one’s enjoyment – we’re far too busy shaking our heads to be touched by it. 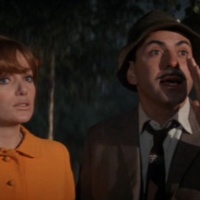