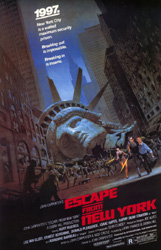 In a world ravaged by crime, the entire island of Manhattan has been converted into a prison which houses the world’s most brutal inmates. And when the President of the United States (Donald Pleasence) crash lands inside, only one man can bring him back: Snake Plissken (Russell), a notorious outlaw and former Special Forces war hero who, in exchange for a full pardon, descends into the decayed city and wages a blistering war against the captors. But time is short: in 24 hours, an explosive charge planted inside Snake’s body will end the mission – and his life – unless he succeeds!

eyelights: the core concept. the setting. the coolness of Lee Van Cleef. the ending.
eyesores: a bit short, not fleshed out enough.

‘Escape from New York’ is a 1981 cult classic by iconic writer-director John Carpenter. It stars Kurt Russell as “Snake” Plissken, a renegade former soldier who is arrested on criminal charges and sent out to rescue the President of the United States, whose Air Force One has crashed in enemy territory.

In ‘Escape from New York’, Manhattan Island has been turned into the New York Maximum Security Penitentiary in 1988 due to the national crime rate having increased 400%. From that point onward, prisoners from across the country were all sent to this island with no hope for return.

To protect the rest of the population, a large security wall was built around the perimeter of the island. It is heavily guarded and any attempt to breach the wall from the inside is treated with finality. No one escapes New York City. Its residents, all convicted criminals, have rotten the Big Apple to its core.

Plissken is plied into doing this task because the President has survived the crash but has been captured by a ganglord who calls himself Duke; if the authorities are seen to intervene, the Commander in Chief will be killed. They even delivered his severed finger as proof. At this point, Snake is his only hope.

However, Snake only has 22 hours to get the job done: the President was on his way to a Peace Summit with the Soviet Union and the People’s Republic of China and time is running out. Once that time is up, all hope of a peace agreement will be undone. Not only is the President’s life in his hands, so is the world’s.

It’s a ridiculous scenario when you think about it, but I love the whole set up of ‘Escape from New York’. I mean, there’s no way Manhattan could be turned into a large prison facility, but the idea of a super-sized Alcatraz is definitely compelling. Can you just imagine the cultural impact of that?

The way that Carpenter delivered the first act, the whole set-up, is brilliant; he takes his time feeding us the details, setting the stage for Snake’s mission. We are introduced to setting, the situation, the key players, and the gambit, and only then can we join Snake on his adventure into New York City.

It takes 29 minutes, a third of the picture, just getting him there.

The set designs and set dressings are phenomenal. ‘Escape from New York’ was made on a low budget (albeit Carpenter’s biggest yet at the time) but they still managed to make the security outpost and security walls look imposing. I was also impressed with their Liberty Island Security Control.

Actually, the only shooting they did in New York was at Liberty Island (they were the first film production to ever get a permit to do so). The rest of the picture was mostly shot in St. Louis and made to look like New York. To the untrained eye, this disintegrating city covered in rubble looks the part.

The setting is indubitably the most significant and unforgettable character in this picture, but there are a few others that make their mark. In particular, there is Lee Van Cleef’s calm but ruthless New York Police Commissioner Bob Hauk. Van Cleef hasn’t been this cool since ‘Per qualche dollaro in più’.

Ironically, his counterpart, Snake Plissken, is based on Clint Eastwood, his co-star in that Sergio Leone classic. Kurt Russell echoes Eastwood so much here that his soft, threatening voice, immediately brings him to mind – except that Russell doesn’t have the physicality or charisma of Eastwood at his best.

It’s interesting to note that tons of actors were considered for the part before Russell got it, including Jeff Bridges, Tommy Lee Jones, Charles Bronson, Nick Nolte, Kris Kristofferson, amongst others. It’s a good thing he landed it, because Russell says this is his favourite movie and part of his career.

There are a few notable appearances by other familiar actors, such as Tom Atkins, Adrienne Barbeau, Ernest Borgnine, Isaac Hayes, Donald Pleasence, and Harry Dean Stanton. I’m no fan of any of them, but they all populate the film perfectly. Only Borgnine annoyed me with his goofy, googly-eyed turn.

Although he was intentionally added for comedic relief, I hated that his character always happened to show up just in time to save the day. He’s also inconsistent, in that he survived for ten years in there by being cautious, but then leaves his taxi unlocked. He has also a crucial tape recording in his possession.

But John Carpenter’s scripts are frequently filled with much worse contrivances, so this seemed almost palatable in comparison. Almost. The fact that the rest of the picture isn’t stretched beyond the realm of one’s average sci-fi comic book adventure kind of helps; heck, James Bond is more absurd.

And yet there were moments that left me wondering, such as when Duke is chasing after them at the end. Given that he’d been planning a full-on assault in the morning, why is he doing it by his lonesome here? For starters, it looks less impressive, but it also seems totally out of character.

Was it for budgetary reasons, much in the same way that the end of ‘Day of the Dead’ was altered (and ruined)?

I also wondered about Snake’s first appearance, which is wedged into the first part of the picture. If it’s the first time you see it and are not aware that he’s supposed to be our hero, it’s a meaningless scene that contributes nothing: we don’t know why he’s brought in by the police, who he is, nothing.

On that note, I don’t find the character all that interesting; he’s just your run-of-the-mill tough-talking antihero. Perhaps it’s Russell’s interpretation of the part, perhaps it’s because Snake doesn’t really distinguish himself from all the other morally bankrupt characters in the piece, but he leaves me cold.

Actually, the only time that I find him interesting is at the tail end, when we discover that he decides to switch the President’s tapes. I relish the darkness and bitter humour of that gesture. But I’m also disturbed by it, seeing as he knew that the fate of world relied on it. Wow… heavy.

Still, it adds complexity to his character.

In any case, the two-thirds of the picture with him in it don’t move me as much, and it’s part of the reason why I rate the picture as low as I do. I would give the central conceit and the staging an 8.0, but I think that the picture would have benefited from a stronger lead and an extra 30 minutes to flesh it out more.

But I really do love the first act of ‘Escape from New York’. It’s demented, but in a good way, and Carpenter laid it all out for us perfectly: it’s adequately serious, and even the performances lend it just enough credibility. Granted, it’s no masterpiece, but it’s no wonder that it’s become a cult classic.

And that it produced a (much-maligned) sequel. And persistent rumours of a remake.

‘Escape from New York’ has plenty of fuel for that type of fire.