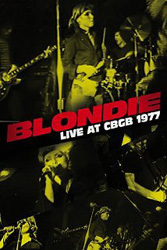 Synopsis: This 47-minute piece of video vérité captures an iconic band and front woman on the rise playing in their natural habitat: New York’s legendary CBGB. Director Rod Swenson was on hand one sweaty night in 1977 to document Blondie ripping through a good part of their debut album while also throwing in some incredible covers from The Yardbirds, The Runaways and Freddy Cannon.

The video is lifted and digitised right off the original videotapes, retaining a grit that makes the viewer feel like they were actually there that night as Blondie and punk rock was in the midst of firming its grip on the city. Highlights include In The Sun, Man Overboard, A Shark In Jets Clothing, In The Flesh, X Offender, Rip Her To Shreds, I Love Playing With Fire and a special rehearsal clip of Denis.

A year ago, I began to explore Blondie, a band that I had thus far ignored entirely. I listened to a couple of their classic albums, which I had picked up along with a ‘Greatest Hits’ set that included a CD and a DVD. I then watched all of their videos, after which I was hungry for more.

Afterwards, being utterly enamoured with “Good Boys”, I sought out the DualDisc version of ‘The Curse Of’ to play on my soundsystem. And when their latest album, ‘Ghosts of Download’ came out, I immediately grabbed the limited edition version that included ‘Greatest Hits Deluxe Redux’.

It also included a DVD of a rare live performance at CBGB’s back in 1977, along with reproductions of a 1979 concert poster and glossy photographs. Although I waited to watch the DVD, I eagerly sunk my teeth into the two CDs – especially ‘Ghosts of Download’ which is total ear candy.

I have no idea exactly when in 1977 the CBGB concert was recorded, or what the context for it was. Was it being recorded for a television broadcast? Or for a home video release? The latter seems unlikely given that home video wasn’t a common thing at the time. But what TV show would this have been for?

There is no context provided with the DVD, either in the packaging or on the programme itself. As with its content, it’s served up as is, with no explanation or excuses. But, according to setlist.fm, it would have been from May 4th, being the first of only two shows Blondie did at CBGB’s in 1977.

(at the end of the performance, Debbie tells the crowd that they’ll be back “tomorrow”)

Either way, whatever the context or intention of the videorecording was, it’s very unlikely that it saw the light of day until now: the show was fraught with technical difficulties, both video and audio. The whole programme is full of banding, pops, distortion, feedback, and drop-outs. It’s raw.

The band is clearly struggling with this from the moment that they hit the stage. The crowd was reacting negatively to the audio, to the extent that the guitarist eventually had to tell them to calm down, that it wasn’t so bad, while Debbie Harry was covering one ear or another from time to time.

In between songs, the band was frequently found tuning instruments and checking in with the engineers to see if things could be improved upon. This added delays to the already short 45-minute set (including encores). At one point, a guy at the console shouted back that they couldn’t hear anything.

That’s when the band just gave up and simply tried to get through the rest of their set.

But it was worth it: for all its technical deficiencies, Blondie’s set was blistering and they did as well as they could under these trying circumstances – in a small venue, on a cramped stage, and with a testy audience who were talkative but enthusiastic. And it’s a time capsule of the band.

In fact, I suspect that, since this show was finally released, nearly 40 years later, warts and all, it’s pretty much the closest thing that we’ll ever get to a classic Blondie concert: there are no overdubs or tweaking involved here – which would likely be grating for audiophiles and perfectionists anyway.

The whole band was energetic, but Debbie Harry once again proved to be the centre of attention, bouncing about and kicking wildly when the mood took her. Still, the anxiety of the moment was evident in that it took until “X-Offender”, 2/3 of the way through, before she even broke a smile. Understandably.

Even though Harry is the star of Blondie, there was also room for the other band members to shine, with the guitarist getting the spotlight a couple of times and the rest of the band taking centre stage for “Rip Her to Shreds”, while she wandered to the side to make room for them. That was cool.

Unfortunately, I’m not as much of a fan of the early part of the band’s career, and this show finds them between their very first and second albums – so they had far less material to work with. For their encores, they did covers of The Yardbirds, The Runaways and Freddy Cannon, respectively.

I really enjoyed seeing this show. Even though it’s not the stuff I enjoy Blondie most for and it’s a trainwreck of a technical presentation, it’s raw archival stuff and I love that. It also serves to highlight that punk energy they started with and that went missing after they hit radio.

I would highly recommend ‘Live at CBGB 1977’ to die-hard fans of Blondie; it’s a must-see. However, expectations need to be tapered considerably in order to enjoy it, as this is a frightful mess. And I would highly suggest that casual fans and the curious skip it altogether

Watching this would only put a damper on one’s interest – or extinguish it altogether.