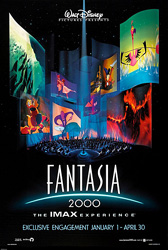 Synopsis: Disney animators and filmmakers have again expanded the boundaries of imagination with Fantasia 2000. Fulfilling Walt Disney’s original vision of uniquely fusing sight and sound in a full-length motion picture, this film begins where its predecessor, Fantasia left off, with seven completely new segments and the return of the popular “The Sorcerer’s Apprentice.”

In this fun-filled movie, breathtaking images are coupled with classical music favorites. From Beethoven to Gershwin – from flamingos bobbing yo-yos to a city in bluesy motion – vivid animation brings the music of the masters to colorful life.

Sixty years after the original masterpiece, Roy E. Disney has orchestrated a brilliant collaboration of more than 1,200 artists and technicians – including the animators of The Lion King, Beauty And The Beast and Aladdin – to present Fantasia 2000.

Although it was originally conceived as a way to make “The Sorcerer’s Apprentice” financially viable, when Walt Disney first got the spark for ‘Fantasia‘ he intended for it to be a continuously evolving work, with new shorts gradually replacing older ones. Although a few ideas were in development it didn’t come to pass. No doubt the cost of the production and it commercial unviability saw to that.

But, by 1974, Roy Disney was finally considering a sequel to his uncle’s masterpiece. It was proposed to the studio years later, and it eventually began production in 1990. Given the heavy slate of feature films that Disney’s animators were busy with at the time, it would take nearly a decade to reach completion, with each short being worked on during lulls and/or over long stretches.

Frankly, I wasn’t too thrilled at the idea of a sequel to ‘Fantasia’. Disney had been on a decade-long streak of hit musical animated films, and they felt more and more formulaic. Add to this the fact that they were on a downward slope of late, and I wasn’t exactly confident that Disney’s current state would inspire the kind of creativity that a ‘Fantasia’ film requires.

So I didn’t go see it at the big screen. Some did: after the end of its run (which included a series of live performances in five cities around the world, as well as exclusive engagements at Imax cinemas), it had amassed close to 100 million dollars at the box office. It wasn’t exactly a massive hit, but it was enough to give the film legitimacy and recoup its production costs.

I wouldn’t see it until a year or two later, however, when it was released with the original on DVD. I had been waiting years to get ‘Fantasia’ on home video and when DVD took the world by storm I patiently waited for its release. At the time, the only way to get all the special features was to get the boxed set, which included a bonus disc. So I coughed up the cash and got the set.

I watched it soon thereafter, naturally. However, I cautiously approached ‘Fantasia 2000’; I was acutely aware that it would be overshadowed by its predecessor. But I was pleasantly surprised: the choice of selections were good, the animation was top notch and it was entertaining. However, I wasn’t especially enamoured with it; it somehow didn’t have the “wow” factor of its predecessor.

Watching it now for what may only be the second time, having now picked it up on blu-ray (again, because it was bundled together with the original), I understand what the issue is with the second one: it feels like a variety show, not like a spectacle of classical music and animation, like the original was. This is the pop version of ‘Fantasia’, the mass-market, accessible, twin brother.

Although there is variety, no doubt so that Disney could hit as many targets as possible, and it makes the programme more digestible, this is partly what contributes to the cheapness of the piece. Another part is the fact that it’s designed to be much more light-hearted, less sober, than its predecessor. And, finally, there’s the length: 75 minutes, including lengthy credits.

This ‘Fantasia’ isn’t even in the same league, but it desperately tries to emulate the original in some ways, paralleling its abstract opening and epic closer, and even bringing the return of “The Sorcerer’s Apprentice”. Yes, not only is it 50 minutes shorter, but it also skimps on the material, recycling an old bit (they initially planned to recycle a couple more, actually)!

The film begins with a long shot of a shadowed studio with the orchestra setting up as audiobytes from ‘Fantasia’ play and images from the original float by on the screen. Unlike its predecessor, there isn’t an introduction right at the onset. Instead, it cuts right to “Symphony No. 5 in C minor-I. Allegro con brio” by Ludwig van Beethoven, the first short of the set.

This one is rather abstract, like ‘Fantasia’s “Toccata and Fugue in D Minor”, but slightly more accessible. It shows us splashes of colour, liquid, butterfly-like triangles in many colours, clouds, flashes of light, …etc. There is a story being told here, but it wasn’t clear to me during the viewing. The animation was a mixture of styles and looked terrific. The show was off to a grand start.

Then Steve Martin arrived to introduce “Pines of Rome” by Ottorino Respighi. That’s when my heart sank slightly. I like Martin in certain contexts, but ‘Fantasia’ is just not the place for his zany but snooty persona. It’s not to say that he wasn’t funny. Hardly. It’s just that I think that if there should be humour in a ‘Fantasia’ programme, it should be more subtle. Dryer.

“Pines of Rome” takes us to an arctic setting. It’s majestic-looking, with its towering icebergs, flocks of birds, and a pod of whales – that fly (it’s impressive to see, as absurd as it is – it is Fantasia, after all). Naturally, to make the short relatable, there is a cute calf that gets separated from its parents and tries to find its way through an iceberg, eventually rejoining them.

This one should be better than it is: the stage is set for a grand spectacle, and it quite literally takes us into the stratosphere, which was cool to see, but I think that the cutesy side of it took the edge off. There was also the fact that the CGI whales didn’t really look that great; we’re talking mid-’90s animation, here, and the whales don’t blend in well with their environment.

Quincy Jones introduced “Rhapsody in Blue” by George Gershwin. This one is 2D and it is based on legendary New York Times cartoonist Al Hirschfeld’s style. He was in his late nineties at the time that the short went into production, so he couldn’t work on the project himself, but the animators put together a splendid tribute to his oeuvre; this short looks gorgeous.

The setting is New York City in the 1930s, during the Great Depression, and it’s a day-in-the-life segment that follows various characters from morning to night. It’s light, amusing. The music doesn’t always go along with the animation (I suppose it’s the other way around, really…) but many of the beats connect. It’s probably the most memorable short of the programme, due to its style.

“Piano Concerto No. 2 in F Major-I. Allegro” by Dmitri Shostakovich is then introduced by Bette Midler. It tells the tale of Hans Christian Andersen’s “The Steadfast Tin Soldier”. It was originally slated to be included in ‘Fantasia’, but no one could decide which music to put it to. This one’s largely forgettable, as the story is too familiar and the CGI characters look horrible.

James Earl Jones is droll introducing “The Carnival of the Animals, Finale” by Camille Saint-Saëns, because he has to set up the notion of flamingos playing with a yo-yo. This is total fluff, and although it’s amusing on its own, it’s far too self-consciously silly for this programme; it tries too hard (in contrast, Fantasia’s “Dance of the Hours” was more whimsical).

Enter “The Sorcerer’s Apprentice” by Paul Dukas, which is introduced by Penn and Teller. Actually, it’s not introduced so much as SHOUTED by Penn, while Teller silently did some jokey bits. Penn was artificial and very grating. The Mickey bit was shown in its entirety, apparently with the original soundtrack, but I got the impression that it looked different, cleaned up, with its colours tweaked.

Mickey goes on to congratulate conductor Leopold Stokowski, as in the original, before moving on to James Levine (who conducted the music for ‘Fantasia 2000’) and going out to look for Donald, who is featured in the next short. Mickey’s voice was re-recorded for the Stokowski part so that it would merge with the Levine part, and they had Mickey’s voice wander around the surround field.

Then came “Pomp and Circumstance – Marches 1, 2, 3 and 4” by Edward Elgar. For this one, the animator told the story of Noah’s Ark, but with Donald as his assistant. There’s a subplot of Donald and Daisy each thinking that the other’s been left behind, only to be reunited at the end. It’s impressive to look at, aside for the CGI Ark, which stands out from the rest.

Angela Lansbury introduces the final segment, “Firebird Suite – 1919 Version” by Igor Stravinsky. It follows a green fairy creature that floats around a mountain side bringing things to life. She then discovers and confronts a demon in a nearby volcano and its ensuing seas of lava decimate everything. But she is reawakened by a large elk and brings lushness back to the devastated area.

I should have found this epic, awe-inspiring, just as the ending to ‘Fantasia’, “Night on Bald Mountain”, was, and yet I was left cold by this segment. I can’t quite put my finger on it, but it somehow felt contrived, maybe too polished, to me. It was a decidedly underwhelming way to close the set for me (although I suspect that not everyone will echo my feelings about it).

The most dramatic difference with ‘Fantasia 2000’ is the sound quality. Having been recorded in modern times, the fidelity of the music is of much higher calibre (the limitations of the original led Disney to re-record the soundtrack for its 1982 re-release). The soundtrack is more vibrant, dynamic, here, and the surround field is used to greater effect. It’s exactly what I’d hoped for.

But, all in all, I’m far less impressed with ‘Fantasia 2000’ (it was to be expected, of course, given the stature of ‘Fantasia’). The variety show format really doesn’t help matters much; it’s more accessible, but it also makes the film less deserving of respect. The CGI animation is another (mild) blight on the picture; it pales in comparison with even the old-school “The Sorcerer’s Apprentice”.

What’s sad is that, although most of the short are actually quite good, the overall impression of the film is that it’s less than the sum of its parts – whereas the reverse was true with ‘Fantasia’: the shorts aren’t all stellar, but one feels like we’re watching something of legend, something worthy of the name ‘Fantasia”. Meanwhile, ‘Fantasia 2000’ is merely a pop film for a pop audience.