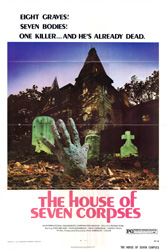 Seeking a truly inspiring site, a film crew shooting a horror movie has found the prime location: a real live haunted house! Several years ago seven people were murdered inside the house, their deaths all occult-related. Though warned not to meddle with the unknown, the crew unwittingly awakens the same evil spirit out for fresh blood. Now, the crew’s biggest problem isn’t running out of film… it’s running for their lives!

The House of Seven Corpses 4.0

“I regretfully bid you a fond adieu.”

‘The House of Seven Corpses’ is a 1974 low-budget horror film starring John Carradine. It takes place in and on the grounds of a Utah mansion, where a film crew is making a motion picture about the strange deaths of the fictional Beal family, long-time owners of this house. Naturally, all manners of spooky happenings befall the cast and crew of the picture.

If it’s anything, it’s essentially a modern Ed Wood picture, with Carradine as its Bela Lugosi: the script is uni-dimensional and the dialogues are full of clichés. But then, so are the characters, who aren’t distinctive whatsoever. The actors aren’t especially good, either: the dialogues are bad, but the delivery is sometimes even worse. Heck, even the camera work is shoddy, shaky, lacking precision.

A perfect example of how Ed Woodian the picture gets is when Anne, the young starlet, looks out the window at night and sees Mr. Price (Carradine), the caretaker, in the cemetery – through a bunch of trees, at a completely different angle, and in a day-for-night shot. It’s like watching two different movies poorly cut together, just like in ‘Plan 9 From Outer Space‘.

The worst thing is that ‘The House of Seven Corpses’ is actually waaay better than the shitty one that the characters are making. Now THAT is outrageously bad! The staging is horrendous, as are the performances, and there is little to no continuity when they’re filming a scene from different angles. I kept wondering who could possibly watch it and think it was any good? At least do retakes!

What do I like about ‘The House of Seven Horror’? Two things: I love the setting, the Utah Governor’s Mansion. It’s a classic haunted manor, all made of wood, with large staircases and landings. It’s gorgeous. And I really enjoy that it’s a movie within a movie, even if it’s a bad movie in a bad movie. This adds a dimension to the picture that others of its ilk don’t have.

But it’s an otherwise truly inept motion picture. ‘The House of Seven Corpses’ has very little going for it, and even I, who has seen my share of bad movies in my time, eventually ran out of apologies for it while watching; there’s really just no excuse for making such a bad film. Even with budget limitations, it could have been better written, its construction could at least be competent.

Unsurprisingly, it would the first and last motion picture that director Paul Harrison would make. He never produced again, and only wrote a telefilm and an episode of Trapper John, M.D. many years later. On a personal level, it’s unfortunate; I’m sure he had greater aspirations for himself. But from my perspective, it’s no great loss. We could all do with fewer films like ‘The House of Seven Corpses’.

At least it’s good for a few laughs. Or jeers, really.