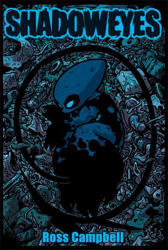 Summary: In the futuristic, dystopian city of Dranac, moody teenager Scout Montana is an aspiring vigilante, but her first attempt to beat up a mugger is halted when she’s hit in the head with a brick and knocked unconscious. When she awakens, she discovers that she’s able to transform into a strange, blue, clawed, superhuman creature! In this new body she becomes the vigilante Shadoweyes… but, she’s unable to return to her human form, and is lured into a homeless superheroic life on the streets by her inhuman appearance – forced outside of society yet still bound to it. Scout’s new life as Shadoweyes is just getting started!

‘Shadoweyes’ is an intriguing book.  A super hero story, it takes a black (not sure that she’s African American) teenaged girl who’s part of her community’s crime watch, daydreaming of fighting crime, and transforms her into a mutant that can make her dream a reality.

Except that it’s more complex than that: eschewing action, the book focuses on the interpersonal relationships between the many central characters in the story. In fact, almost all of the crime-fighting remains off the page, something that very few superhero comics would dare do.

Shadoweyes is also an intriguing character. The former Scout Montana can no longer pass as a human being. She is vaguely humanoid, but had a large alien head, a long sharp tail, massive legs, and is now blue. Her best friend stays by her side, but she has to hide from society.

Scout, who now insists on losing her name and being called Shadoweyes, has to drop out of school, become homeless, and lives on the dilapidated streets of Dranac, a post-apocalyptic megalopolis nightmare. She is insistent on being a superheroine, feeling that this has been her calling all along.

Unfortunately, she has no fighting or acrobatic experience – so, despite her abilities, she’s constantly falling on her face, getting hurt and/or making mistakes. She’s persistent, though, and does find success in the process. However, she’s a controversial figure amongst Dranac’s citizens.

She struggles with the moral dilemmas of what she’s doing. While she’s trying to do the right thing, Shadoweyes doesn’t yet know which battles to fight, where to draw the line, …etc.; it’s a much more complex approach to superhero comics than most, which are usually cut and dry.

Here is a heroine with a deep, multilevel, social conscience: she’s vegan, won’t abide animal cruelty (in fact, rescues animals), and is incredibly accepting or others’ differences. She even feels compelled to take others under her wing, serving as a friend/mentor/protector. She truly is a heroine.

It doesn’t make her perfect, of course. She’s a teenager: she has mixed feelings about a number of things and she is only just starting to form her opinions on all sorts of matters – including the difference between the law and justice, or right and wrong. As a budding crime-fighter, that’s a challenge.

Ross Campbell has written a number of unconventional characters along with Shadoweyes, something that has really impressed me:

Nobody’s got it easy, really, but they all deal with it, are accepting of themselves and of those around them. Ross injects a lot of empathy and emotional intelligence in his characters – especially given their respective ages. It’s an unconventionally human book, given the genre.

I loved how Campbell broached gender issues by making Shadoweyes sexually amorphous. She says that, despite her physical form, she feels and always has been a girl. He also seems to be setting up romantic love, in a broader fashion, making it about connection, not gender.

I’ve got to say, I’m turning into a bit of a Ross Campbell fan. He’s got a different touch than other superhero comic writers: he gets to the heart of his characters, making all else secondary. And yet, he keeps it exciting on an emotional, intellectual and even visceral level. Impressive stuff.

But what’s even more amazing is that he does double duty as the artist as well!

And he’s exceptional! For all my reservations in ‘Glory‘, he was superb in ‘Wet Moon‘ and is equally fantastic here. I don’t know if it’s because he has more of an investment in his own works or if it’s because his art looks better in black and white, but it’s total eye candy here.

Although his style is slightly cartoony, it doesn’t lack detail one bit: Campbell fills each page and each panel with an abundance of elements that flesh out the world he’s created; it feels real, lived in. And his inking style is entirely suited to the work, with rich blacks and clean lines. Very nice.

While I was unsure about continuing ‘Glory’, I know that I will carry on with ‘Shadoweyes’. In fact, I’m eager to. It’s hardly my favourite book, but I love everything that it’s about, and I want more of it. I look forward to seeing where Campbell will take it next. This one shows promise.