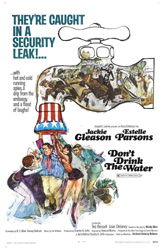 Synopsis: They Think He’s a Spy. He Thinks They’re Out of Their Vulgarian Minds.

Only the mind of Woody Allen could cook up a New Jersey caterer whose vacation to Europe turns into an international espionage incident in this hilarious send-up of the Cold War. When the plane carrying Walter Hollander (Jackie Gleason), his wife (Estelle Parson) and beautiful daughter (Joan Delaney) is hijacked to Vulgaria, all it takes is Walter snapping a few photos on his first Iron Curtain tarmac and the family is arrested for spying. After taking refuge in the American Embassy and with no hope of ever getting out, it’s up to Walter to outfox the Vulgarian army and prove he’s a lot smarter than chopped liver.

“Well, they don’t call me the potato salad Picasso for nothin!”

‘Don’t Drink the Water’ is a 1969 motion picture based on the successful Woody Allen play of the same name. It was adapted for the screen without Allen’s involvement, resulting in a final product that the legendary auteur disliked so much that he felt the need to remake it himself twenty five years later.

The story centers on an American family on a European holiday, inadvertently find themselves on the other side of the law and escaping to a U.S. Embassy for protection – creating diplomatic tensions between countries. Complicating matters is that the U.S. Ambassador is away, leaving his inept son in charge.

While the play confines them exclusively in the Embassy, the film version takes us outside a few times – and it’s a good thing that they did, too, because the set for the Embassy is one of the cheapest sets in recent memory (hilariously, when they arrive, the music suggests the grandeur of a lavish palace. What a joke!).

This incarnation the play starts off with the family preparing for their trip, to the sounds of mildly comic soundtrack, has them boarding a plane (this is where we get to know the characters for the first time) , then takes them around Europe over the credits, via pictures of their trip, of various landmarks, …etc.

(One notable aspect of these credits is that they are in multiple languages, reflecting the multitude of places the family visits)

The plane and the airport are pretty much the only other sets over the course of this fine film. On their way to Greece, their plane is hijacked and rerouted to Vulgaria, where the family’s troubles will begin. We will get to see the Vulgarian airport a few times by the time the end credits roll.

Interestingly enough, apparently the original play makes no mention of Vulgaria; the story merely takes place in an unnamed country behind the iron curtain. There is also no mention of a hijacking: in the play, as in the 1994 version, the family simply blows into the Embassy on the run from the local secret police.

I suppose that the filmmakers wanted to add some action to the picture, but the staging of the sequence is preposterous:

For inexplicable reasons, the whole family decides to leave the plane, take a few pictures, thereby incensing local authorities and, on the run, scamper into the Ambassador’s limousine – which just happens to be sitting there after having dropped him off. Somehow, they convince his driver to take off and a chase ensues.

Once arrived at the Embassy (somehow, the Vulgarian secret police never caught up with them or headed them off), they are trapped inside. And, while they are officially on United States soil, they cannot leave: the Embassy is completely surrounded by soldiers waiting to arrest them for espionage.

And so they must spend days on end in the Embassy, the setting of the original play. Astoundingly, not only is the Embassy cheap-looking, but it is totally devoid of human presence. I can’t even fathom the stage play being this empty: there’s no one there except for the son, his assistant and the chef. WTF.

From there were treated to all sorts of comic situations, all fueled by Mr. Hollander trying to prevent his partner from sinking his catering business while he’s away, Axel Magee (the Ambassador’s son) trying his best to handle a situation he is absolutely not trained for, and various misunderstandings.

Further complicating matters is that Susan and Alex are totally smitten – much more quickly or overtly than in the Woody Allen version. There’s also an elaborate student demonstration sequence that is set up by Commissar Krojack of the secret police; it exists in the Allen version, but to a lesser degree.

Krojack is the main antagonist here. He also is in the Woody Allen version, but there was also a secondary antagonist in the form of Mr. Kilroy (who should be second-in-command at the Embassy, except that the Ambassador dislikes him); he becomes Alex’s nemesis. He doesn’t exist in this version.

Other notable differences are that the filmmakers decided to add a secret passage in the Embassy, one that coincidentally joins Alex and Susan’s rooms together; this added even more focus on their burgeoning relationship. And then there’s the contrived ending, which is longer and nonsensical.

Of course, much of this doesn’t matter if the cast shines – because great comedians can turn coal into comedy gold. But it doesn’t (to be fair, neither did the cast of the Woody Allen version):

Basically, this version of ‘Don’t Drink the Water’ feels like a second-rate reheat when it could have been the hottest number of the Cold War era. The direction is sloppy (watch the wine glass change hands at the end), the script is weak, the sets are pathetic, the score is clichéd, and even the cast is hit and miss.

I wouldn’t tell people not to drink this water, but it won’t quench anyone’s thirst. Having said that, it’s also not nearly as bad as some people would make it out to be. Mostly, if anything, this is an intriguing footnote in Woody Allen’s large body of work. This one is for die-hard Allen fans only. 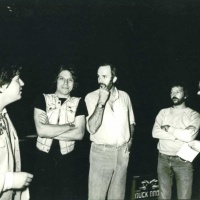 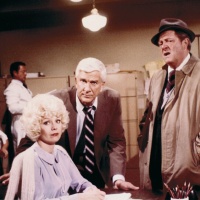