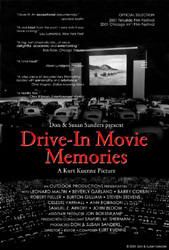 Synopsis: This one-hour documentary special is a film celebration of America’s greatest icon of youth, freedom and the automobile. What began as an auto parts owner’s business venture to make some easy money accidentally became a magical place where romance, fun and a sense of community flourished. This film chronicles the drive-in’s birth and development, its phenomenal popularity with audiences of all ages, its tragic decline, and its inevitable comeback as a classic form of Americana.

Do you remember the drive-in? I do. I didn’t get the chance to see tons of movies at these outdoor cinemas, but I saw a few. And I have fond memories of them. As a teenager, a few of my friends liked to gather at one of the local drive-ins for nights out. It was an excuse to hang out really: they always played double-features, so we could be there the whole evening.

The double features were often the weirdest pairings: ‘Terminator 2’, followed by the much-derided stinkfest called ‘Hudson Hawk’, or ‘Bill and Ted’s Bogus Journey’ followed by ‘Dances With Wolves’. No joke! I don’t know who did the programming, but they were idiots. I also remember seeing ‘Star Trek V: The Final Frontier’ – although I wish I could forget.

‘Drive-in Memories” is a nostalgic 2001 documentary film that reminisces about the drive-in. Produced by Don and Susan Sanders, who wrote two books on the subject before making the film (realizing that they had all this archival material from their research), it consists of interviews with industry folks and actors/actresses about this North American cultural icon.

What really impressed me were all the wicked inserts of drive-in snack ads, intermissions, introductions, …etc., that were featured in it. It was both the sheer number of them and the nostalgia factor: right from the start, we’re taken back through the years to a time when unsophisticated, scratchy adverts welcomed you to the drive-in for a night’s entertainment.

‘Drive-in Memories’ gives a good sense of the history of the drive-in, even if it is more of an overview than an exhaustive look. It talks about its origin, with the first one opening on June 6, 1933, in Camden, New Jersey. It also provides a variety of stories to try to explain what brought about this unusual idea. It is, after all, a rather unintuitive concept.

But it was a cheap operation then: all the operators needed were a screen, a projector and large swatch of land – which was very cheap back then. Even the food was rather simple in the beginning. The drive-ins were so far out in the country, that the operators would have to make arrangements to get the prints – and they certainly didn’t get first run pictures.

Before World War II, there were only 100 drive-ins in operation. After the war, however, people were starved for entertainment, for escape. Communities also spread out and there weren’t cinemas set-up there, but land was cheap, so drive-ins started to get built everywhere. They were no longer run by farmers, though; these new operators were businessmen.

‘Drive-in Memories’ also talks about drive-ins in other countries; as the idea spread across North America it eventually spread around the world. Or it tried to. Unsurprisingly, given the infrastructure, Australia was a big drive-in country. It didn’t work in Germany due to their curfews (kids had to be home early) and Japan simply didn’t have enough real estate.

Not only did drive-ins offer larger screens than the cinemas did, but there were a variety designs, and options:

As with anything, fans of drive-ins could be extremely devoted. One of them talks about going out to watch movies in the Alaskan winter. Needless to say, it wasn’t the greatest experience: his drinks were frozen by the time he got back from the concession stand. Why he ever left his car in the first place is beyond me, but I guess that was likely par for the course.

Drive-in owners used gimmicks to draw the crowds in, such as contests of all sorts, bringing in animals (one had a monkey park! No joke!), they would have people do stunts, they’d even bring in bands. To draw families, they had rides, playgrounds, horses, anything to appeal to children; they knew that, if they reeled in children, they had the whole family. So they would open early for the kids to come play.

Sometimes, to promote movies and bring in crowds, actors would show up at drive-ins (Raquel Welch, for instance, did it for ‘One Million Years B.C.’). I suppose that actors were likely slumming it when they were compelled to do this. One amusing story was that ‘Blazzing Saddles’ premiered at a drive-in, but moviegoers had to come on horseback instead of a car.

The concession stands became more sophisticated and organized, as the drive-in owners started to realize that this is where they could make their money. Leonard Maltin commented on the in-show ads that were played, which showed utterly unpalatable foods; he wondered why they would show such bad ads if they were trying to sell their products. Admittedly, the ads were awful.

The drive-in was extremely popular, but then came the television, changing the game. Families stayed home, but teenagers took over – it was a great place to take a date (many of the participants commented about the fact that drive-ins were a place to get some… um… privacy). So some film producers aimed their films at these younger audiences, focusing on horror and beach movies.

Then came the VCR and that killed the drive-in definitively; kids were staying home to watch movies now. Plus which the value of properties had sky-rocketed; it was simply not viable to keep drive-ins going. Most got torn down (in my neck of the world, most of them closed in the mid-’90s – all within a year or two). They still exist in smaller communities, but they’re rare.

‘Drive-in Memories’ is filled with wistful, nostalgic commentary about the drive-ins and the memories they created. At 57 minutes in length (the DVD claims 75 minutes, but that’s including the special features), it’s a bit short for my taste. It would have been nice to have more participants and to hear highlights of their drive-in experience, not just their enthusiasm.

But, all in all, it was both an entertaining and informative documentary. It actually makes me want to revisit the drive-in, to relive the unusual experience of being cooped up in a car, watching a movie through its windshield. Or to sit outside, in a folding chair, wrapped in a blanket, getting eaten alive by mosquitoes. Okay, it doesn’t sound like fun, but it’s different.

I might just watch movies that take place at drive-ins instead. The fantasy of it is probably more fun than the reality of it ever could be. 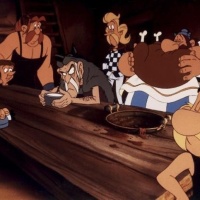