The Secret Policeman’s Other Ball 7.75

“Pay no attention, please. When I say “Ssshh”, it’s just a nervous mannerism I’ve picked up. If, uh, if I want you to be quiet, I will say “Shush”. You were saying?”

‘The Secret Policeman’s Other Ball’ is the fourth set of fundraising concerts held by the British wing of Amnesty International, and the second in the now-legendary series. Performed September 9th to the 12th, 1982, at the Theatre Royal, Drury Lane in London, it featured many members of Monty Python, most of the principal cast of ‘Not the Nine O’Clock News’, as well as many other comedians.

After the massive success of the former show, It was decided to focus a bit more on the musical portions of the benefit shows, and a handful of notable musicians, such as Sting, Eric Clapton, Jeff Beck, Phil Collins, Donovan and many others showed up to lend a hand. Ironically, Bob Geldof (organizer of Band Aid, Live Aid and Live 8) took some convincing to join in; he felt that these shows were a waste of time.

To promote the concerts, the organizers decided to put together a spoof awards ceremony, featuring all sorts of silly categories (with all the winners prearranged, of course) and even did it in tandem with the BAFTA Awards. Unfortunately (or fortunately, as the case may be), this caused some controversy when it was discovered that they were booked in the hall that was to be used by the BAFTAs themselves.

The resulting material from these live shows were edited and later released as films (there were two very different cuts – one for the UK market and the other for the US market) and two soundtrack albums (one for the sketches and one for the music) of the shows’ highlights were put together. The latter, with its star-studded line-up, made as splash, hitting the top 30 on the Billboard charts.

This original, UK version of the film (which only includes footage from the 1982 shows – not a combination of the 1979 and 1982 shows, as the US one does), starts with animation in the opening credits,  featuring the first appearance of the Secret Policeman cartoon character. This highlight reel starts very strong, but eventually peters out by the midway point:

1. John Cleese and the cast – A Word of Thanks: This consists of an intro by Cleese and the others thanking the audience for contributing to the cause – and then berating the “cheap” ones in the second balcony. Then some of the other comedians pitch in and every group in attendance ends up getting berated in turn, based on various arguments. Hilarious stuff. 8.5

2. Rowan Atkinson and John Cleese – Beekeeping: Atkinson interviews Cleese, playing a bees specialist. However, the interviewer has all sorts of ticks, interrupting the exchange regularly and making the specialist nervous, confused and edgy. It’s pretty funny, if kind of silly! 8.0

3. Alexei Sayle – What’s on in Stoke Newington, part 1: This is merely a stand-up routine/rant about the various classes. It’s energetic and confident, but it left me underwhelmed. 4.0

4. Sting – Message in a Bottle: This was a solo performance by Sting on bass. It was very good, actually. 8.0

5. John Wells – Denis the Menace: Wells does a spoof of Margaret Thatcher’s stuffy, entitled husband. I don’t know how accurate the portrayal was, but it was an excellent performance and script. It got loads of laughs. 8.0

6. Chris Langham – Reading the Riot Act: Langham did a stand-up skit about an interpreter, learning Japanese, and taking cocaine. Then he and partner did a small bit of spoofing of trapeze artists. It was extremely funny in the beginning; his delivery was excellent. 7.5

7. Phil Collins – In the Air Tonight: Collins did a piano rendition of his classic with some guitar accompaniment. It’s not as good as the original, but it was nice anyway. 7.75

8. John Cleese, Pamela Stephenson and Graham Chapman – Clothes Off: Cleese is waiting at a bus stop when a woman starts to harass him into giving her some money. It gets a bit nutty and he turns the tables on her. Then Chapman interrupts in his own inimitable way. Silly stuff. 7.75

9. Jeff Beck, Eric Clapton and backing band – Further On Up the Road: This was a fun blues-rock number. It’s lively and the pair are clearly enjoying themselves, but it wasn’t that interesting to me. 7.0

10. Victoria Wood – I’ve Had it Up to Here with Men: I don’t know Wood, but I enjoyed this amusing piano number about her disillusionment with respect to the act of love. 7.0

11. Donovan – Catch the Wind: Donovan plunked on his steel guitar backed by a dude on stand-up bass. Frankly, it didn’t do a thing for me whatsoever. 5.0

12. John Cleese, Rowan Atkinson, John Bird, Tim Brooke-Taylor, Graham Chapman, John Fortune and Griff Rhys Jones – Top of the Form: This was a spoof of TV competitions pitting schools against each other (in this case a boy’s school and a girl’s school). Cleese played a game show host who has all of the answers screwed up, forcing the contestants to try their best to guess the answers. 7.5

13. John Wells – Ronnie: Wells returned with a spoof of Ronald Reagan. It was okay, but no more. 5.0

14. Bob Geldof and Johnny Fingers – I Don’t Like Mondays: I found this one slightly long, truth be told: the lyrics and performance were quirky but not particularly skilled – with Geldof’s vocals, in particular, being fairly strained. I’m sure people had a different reaction at the time, but I have no historical context to understand its significance. 5.5

15. Alan Bennett and John Fortune – Men’s Talk: This is just a discussion between two middle-aged men about sex. One takes sex extremely seriously while the other dismisses everything the other says. I missed some of the exchanges due to the accents and poor audio. 6.5

16. John Cleese, Graham Chapman and Tim Brooke-Taylor – Cha Cha Cha: Dressed in tuxedos, an announcer established that we are supposed to imagine our trio naked. Then they proceeded to doing a cha-cha while holding cards over their chests and naughty bits. Brooke-Taylor frequently lost his cards, so the others had to scramble to hide him, and, in turn, themselves. Meh. Good for about 90 seconds, not 4 minutes. 6.5

17. Rowan Atkinson – Overture: Atkinson pretended to be an orchestra conductor, waving his baton in peculiarly animated ways to the sounds of classical music. Unsurprisingly, he did a good job of mixing stuffy and goofy. Not bad, if a bit long. 7.0

18. Alexei Sayle – What’s on in Stoke Newington, part 2: This was just a rant about mimes and various things. The crowd was enjoying it, but I didn’t. I actually can’t fathom why Sayle is featured twice in this film. 5.0

19. The Secret Police – I Shall Be Released: This is basically an all-star jam with Sting on lead and all the other musicians as back-ups (including a veritably yummy Sheena Easton. Wow…). They’re all animated, with a fair bit of dancing and a lot of background singers, …etc. It’s not my bag, though. 6.0

20. Michael Palin – End credits: Palin, in the guise of a janitor, stops the credits halfway through to peddle ‘The Secret Policeman’s Ball’ ware, including VHS tapes, LPs, books, sweatshirts, and many other, more jokey, items. Then the credits continued. 7.0

Bizarrely, although the producers decided to shoot on film and hired noted filmmaker Julien Temple to helm the project, the film is poorly cobbled together. I don’t know if it’s the editor’s fault, or Temple’s, or if it’s just the print, but there were these horrible pops in between sets. In fact, the audio was generally poor, with frequent crackles marring the proceedings. This film needs serious remastering.

But, overall, ‘The Secret Policeman’s Other Ball’ is an excellent concert film. It features some classic moments by comedy and music legends and doesn’t fail to entertain, even if it starts off strong and ends on a less solid footing. As a historical document it is absolutely essential in understanding how the 1980s’ pop cultural and soci0-political landscape was shaped; suddenly, the two of them merged.

It may not look it, but ‘The Secret Policeman’s Other Ball’, influential as it was, is a landmark. 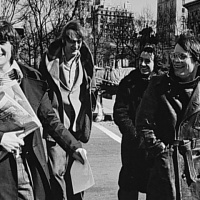