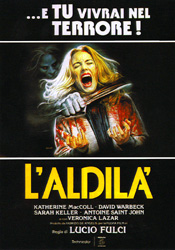 Synopsis: The seven dreaded gateways to hell are concealed in seven cursed places… And from the day the gates of hell are opened, the dead will walk the earth.

Beneath a run-down New Orleans hotel lies a dark, evil secret. The entrance to the underworld is waiting to be opened, and when new residents of the hotel move in…the evil is awakened. Demonic forces of all shapes and sizes are rising up and violently attacking the living one by one. Can the text of an ancient book save the tenants from a horrible death? Will mankind prevail over the demonic forces, or will it perish in a bleak wasteland conquered by legions of the undead?

Catriona MacColl and David Warbeck star in The Beyond from famed director Lucio Fulci (Zombie, House by the Cemetery). Presented uncut and in its original aspect ratio for the first time on American home video, this nightmarish classic is not for the faint of heart! Fresh from its recent nationwide theatrical re-release, get ready for…The Beyond!

eyelights: the exquisitely symphonic soundtrack. some of the ingenious gore effects.
eyesores: the sloppy, if not ridiculous staging. the incoherent script. the poor lip-synching.

“Woe be unto him who opens one of the seven gateways to Hell, because through that gateway, evil will invade the world.”

‘…E tu vivrai nel terrore! L’aldilà’, or ‘The Beyond’, is the second part of ‘Gates of Hell’, an unofficial trilogy by Italian horror icon Lucia Fulci. It is considered by many as a horror classic (In fact, the reason I picked it up was because the store clerk told me it was the best horror film she’d ever seen. If not for her enthusiastic recommendation, I likely would have skipped it)

In my estimation, it’s a right mess.

The film revolves around a Louisiana hotel that was once the site of a terrible murder, and which opened up a portal to the realm of the undead. Over 50 years later, Seven Doors Hotel, now in major disrepair, has been bequeathed to a New Yorker by her uncle. Seeing this as her last chance at success, after many professional missteps, she decides to renovate and reopen Seven Doors.

Little does she know of the evil that lies in wait not only in the flooded, rotted basement, but also in room 36, where the murder had taken place.

The problem with ‘…E tu vivrai nel terrore! L’aldilà’ is that it doesn’t make sense at the best of times. After the visually-pleasing opening, which takes place in 1927 and which Fulci wisely decided to shoot in sepia tones, the film begins to devolve immediately, stringing together a series of absurd accidents, encounters and directorial choices that defy all logic.

Even the gory kills are often patently absurd. I suspect that they are the key draw of the picture for most people, but many are too poorly rendered and stupid to be mentioned. At least there were a few pretty clever ones, like the slashes on the painter’s body, the eye gouging of the handyman, and the woman who has acid poured on her face.

What bothers me the most is that most of these grisly, messed up deaths are totally ignored by anyone in this film – they’re all explained away as accidents! Really? Doesn’t anyone wonder about a man being murdered in an empty hotel? Or a woman being killed in a morgue? Are there no questions being asked by anyone about the unusualness of these deaths?

At least Fabio Frizzi’s motion picture score was pretty tasty. It was all synth-based, and as such didn’t achieve the grandeur of an orchestral score, but his music is the defining element of the picture next to the gore. In fact, I was only tempted by ‘…E tu vivrai nel terrore! L’aldilà’ in the first place because, two weeks before, the music had been playing in the same store I bought this DVD in; it had caught my attention.

Unfortunately, the film’s soundtrack was annoying because neither the English or Italian audio were ideal, given that the actors were a mix of both. Furthermore, the English dubbing was horrible, even for the English actors! At first, I preferred to watch it in Italian, because, by reading the subtitles, I was less affected by the lip-synching issues. But, eventually, I gave in and watched it in English because the film was incoherent enough that it didn’t make a difference anymore.

‘…E tu vivrai nel terrore! L’aldilà’ is considered by fans to be Lucio Fulci’s masterpiece. Honestly, I don’t get it. There’s something oddly appealing about it, certainly, but it’s a really terrible film by any objective, technical standard. So I truly don’t understand how it could be held up so highly by fans; saying that it’s enjoyable in its own way and showering it with praise are two entirely different things.

But I don’t mind having seen it. I doubt I’ll watch this again, and am becoming ever more sceptical that I’ll become a fan of Fulci’s, but in ‘…E tu vivrai nel terrore! L’aldilà’ I’ve discovered a new composer, and that’s something to celebrate. I’m pretty sure that I’ll be getting the soundtrack CD someday; I’ll certainly be keeping an eye out for that one, and will read up on Fabio Frizzi to see what else he’s done.

In the end, there may be something beyond ‘The Beyond’. 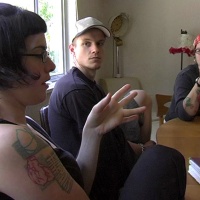