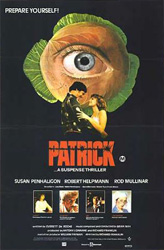 Synopsis: He’s In A Coma…Yet, He Can Kill.

After violently murdering his mother and her lover, young Patrick lays comatose is a small private hospital. When a pretty young nurse, just separated from her husband, begins working at the hospital, she senses that Patrick is trying to communicate with her, while others in her life are being killed in most mysterious ways.

‘Patrick’ is a 1978 Australian motion picture about Kathie, a young nurse who gets hired to take care of a peculiar coma patient. Patrick has been in a coma since the murder of his mother and her lover and has not responded to any stimulation since. However, since Kathie’s arrival, mysterious things start to happen…

This was a relatively popular film internationally (for an Australian genre film) – so popular in Italy, in fact, that it spawned an unofficial sequel there. It even influenced Quentin Tarantino’s ‘Kill Bill, vol. 1’. An official sequel was eventually considered, but it never happened (although a remake was released in 2013).

When I saw Patrick’s stare from the front of the DVD case in the secondhand bin of my favourite local video store,  I was immediately pulled. What the heck was that, I wondered? I had no idea, and yet an echo of familiarity rung in me; I couldn’t place it, but it wasn’t the first time that I’d heard of it.

It didn’t seem like much. Looking at the back jacket of the DVD, it looked like any old b-movie to me; it was clearly made on a low budget, was from the ’70s, and it didn’t suggest anything spectacular. So what was it that made it stand out? That’s when I noticed that the director was none other than Richard Franklin!

Obviously some people are going to say “There a sequel to ‘Psycho’?“. Yes. Obviously, some people have simply not kept up. What’s important is that ‘Psycho II’ is a bloody good film – one of the best horror film of the ’80s, and certainly the best sequel I can think of from that era. It’s actually quite clever and well-conceived.

As a MAJOR fan of that movie, a part of me wants to explore Franklin’s oeuvre; if he managed to make a sequel that doesn’t completely falter in the shadows of the genre’s master, he must have other aces up his sleeve, right? That’s why I picked up ‘Roadgames’ (which I will write up soon). And that is also why I picked up ‘Patrick’.

At the time that Franklin made ‘Patrick’, he had only made two softcore exploitation films. But, having worked for Hitchcock and studied him to a large extent, he was intent on making a thriller of a Hitchcockian nature. When he got his hands on the script for ‘Patrick’, he saw in it the potential to pay homage to the “Master of Suspense”

And thus it is that the picture is littered with multiple Hitchcock references everywhere (‘Breakdown’, ‘I Confess’, ‘North By Northwest‘, ‘Psycho‘, ‘Rear Window’, ‘Shadow of a Doubt‘, ‘Vertigo’, and many more). It also referenced ‘Jaws’ (and likely other films), but it was these Hitchcockian elements that caught the eyes of the producers of ‘Psycho II’.

While I can see how a pop culture junkie like Quentin Tarantino would love a film of this genre, it would likely have much less of an impact on anyone who isn’t as film history-literate. In fact, even though I’ve seen all of Hitchcock’s American productions, and many older ones, I needed Franklin’s audio commentary to point out his tributes.

Thankfully, the film holds up on its own. It’s no masterpiece, but it does bring in a number of interesting elements to build up the suspense with – not the least of which is Patrick,  with his absolutely eerie gaze (it is said that actor Robert Thompson had to use a special mix of eyedrops to keep his unblinking eyes hydrated for the filming).

There’s also the small matter of telekinesis, which was a popular plot element at the time (ex: ‘Carrie’ and ‘The Fury’), and how it’s used to add an element of uncertainty and danger to the mix. Between Patrick staring creepily and blankly and the weird incidents taking place, it’s enough to get a chill or two down one’s spine.

Except that it doesn’t always hold up. For example, at one point, a guy gets caught in the hospital lift… and he stays there for a couple of days. How could no one notice? Did I merely misunderstand the context somehow? Either way, there’s a failure to create and sustain a credible situation, which thereby diffuses the tension that has built up so far.

The characters are mostly interesting, though. The relationship between Kathie and her husband was a bit wonky (at one point he breaks in and pretends to attack her. Weeeeird.), but there are some intriguing ones: Dr. Roget, for instance is quite a character, while Matron Cassidy is one notch softer than Nurse Ratched.

These people don’t all necessarily come off as realistic, but they are certainly fascinating in their own way – as is the rest of the picture. If anything, ‘Patrick’ is a series of great ideas that didn’t entirely gel, either due to an extremely low budget, or to the filmmakers’ inexperience (it was Everett De Roche’s first screenplay, and Franklin had to help him tweak it).

While ‘Patrick’ can be slow at times, and it makes it hard to suspend one’s disbelief, it’s pretty decent overall. At the very least, it proposes a number of good ideas (that perhaps the remake has taken full advantage of – I plan to find out). Fans of genre films will no doubt get a kick out of it, and mega-fans of Alfred Hitchcock will likely be delighted with it.