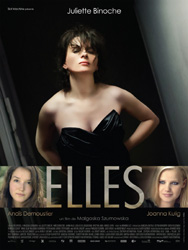 Synopsis: The world’s oldest profession still has its secrets

A provocative and raw exploration of female sexuality, director Malgoska Szumowska’s Elles paints an unromantic picture of upper-crust domesticity refracted through the vibrant eroticism of prostitution.

Vacillating between opposing worlds defined alternatively by sexual freedom and constraint, Elles stars the fearless Juliette Binoche (Chocolat) as Anne, a well-off Parisian journalist investigating the lives of two student prostitutes (Joanna Kulig and Anais Demoustier) for a magazine article. What begins as a routine assignment shaped by preconceived notions quickly turns personal, as Anne is drawn into the lives of these fiercely independent young women and forced to confront her own sexual fears and desires.

A bold examination of poverty and privilege, age, and youth, Elles draws into question the loneliness, sterility, and isolation that plague martial life and stifle sensuality.

eyelights: the realistic minutia of Anne’s life.
eyesores: the minimal exploration of the two call girls.

When I first saw the trailer for ‘Elles’ I was totally unimpressed. It was ambiguous: we knew that it involved some call girls, and that Juliette Binoche interviewed them for some reason, but we didn’t really know anything about the plot. What was this about? Since it showed us nothing intriguing, I was truly ambivalent.

Even when I started this latest streak of “sexy” films, I couldn’t be bothered with it; I saw it sitting on the rental shelf of my favourite video store and picked something else. It’s only when the list of films about prostitution began to grow that I reconsidered it; if I was to explore the theme more thoroughly, I felt that I should include it.

I now understand why the trailer had little to offer: ‘Elles’ is about the impact that the interviews have on Juliette Binoche’s Anne – it’s not plot-driven so much as character-driven, with much of what’s going on being internal, not external. There wasn’t much for the trailer’s editor to work with, basically.

‘Elles’ covers one day in Anne’s life, as she tries to finish a piece for Elle magazine. This is not especially clear at first because her story is interspersed with flashbacks of her separate interviews with the two girls, Charlotte and Alicja, and also with background material on both young women’s personal lives, establishing their history.

Charlotte is a pretty girl-next-door type with these striking doll’s eyes. She fell into prostitution when she realized that she couldn’t handle the tedium of minimum wage jobs. She keeps a part-time job in order to justify her cash flow to her boyfriend and her family, but she enjoys what she’s doing, despite the challenging balancing act required to keep her professional and personal lives separate.

Alicja is another matter. From Poland, she came to France to study but ended up stranded after losing her suitcase and, thus, all her paperwork: she couldn’t prove her identity or get access to money. After being helped by a young man, whose kindness was a trade off for sex, she became a working girl. She seems jaded, even as she enjoys some of the attention and independence.

Anne is bewildered by the encounters: she had started this article expecting abuse and misery, not contentedness and self-empowerment. This leads her to question her own existence, which is in servitude to the men in her own life: her husband, her teenage son and her pre-teen son. As she struggles with everyday chores and demands, she wonders what it all means.

She spends the day listening to the recordings of her interviews, and revisits the connections she’s made with the call girls. She begins to see the men around her in a very different light, realizing that they all have their secret lives, and that any of them could be those girls’ clients – most of which are being bored husbands and boyfriends. So, where does she fit in? What is her role?

Personally, I really enjoyed all the attention spent poring over the mundane details of Anne’s everyday existence. Simple things like showing her take care of the laundry were filled with inspired details, like how she had to move a Spider-man toy around to make room for her. Between the director and Binoche, a lot went into making her moves realistic. I really liked that.

I also enjoyed that the film didn’t hit me over the head with its conclusions. It remained ambiguous to the end, even as it explored Anne’s journey. Some of it might seem -and might even be- meaningless, but it all adds up to the portrayal of one significant day in the life of a human being like any of us – you, me, your best friend, a parent, your neighbour, a coworker, that person waiting at the bus stop, …etc.

I love that it’s relatable even as it’s introspective.

Another thing that I liked was the choice of actresses to play the parts of Charlotte and Alicja. I was impressed that they didn’t go for Barbie dolls or what many of us would likely envision as a stereotypical prostitute. Both looked very natural, one being waifish, the other a little heavier set. Both had their imperfections and yet were beautiful in each their own way. And sexy.

Because, for those who are easily shocked, it’s important to note that Anne’s recollections of the interviews are shown to us in ‘Elles’, as are the stories that were told to her – the sexy and the not-so-sexy. This is not family-friendly fare: Anne is basically recreating those moments in her head, with all the colour she might inadvertently be adding to them. It’s the way she interprets those moments.

Through her subjectivity, one also has to wonder if what she was told is the truth: were Charlotte and Alicja telling her the honest-to-goodness truth, or were they fabricating stories for her to print? It seems unlikely that these two young women could claim to enjoy their work as they do or that there is no element of danger in it – which leads me to wonder if what we were seeing was reality.

Of course, it’s also quite possible that the writers simply went with an idealized representation of these scenarios for some unknown reason – that were trying to portray prostitution a different way. Except that the hooker with a heart of gold thing is nothing new, and neither are the distant husband, pothead son, …etc. Did they simply get trapped into writing clichés, or this simply Anne’s reality as she sees it?

After all, Anne went into each interview with her prejudices and pre-conceived notions – so who says that these don’t also influence the way that she discerns and recollects her life? Perhaps those ingrained perceptions are preventing her from seeing her own reality in a less stereotypical way; perhaps she’s feeding her own disenchantment and disenfranchisement from her family life.

I may never know for sure. But I will likely re-watch this film and try to separate the “fact” from the “fiction”. Perhaps by watching it from a purely subjective (i.e. Anne’s) standpoint it will come together more cohesively. As it stands, it remains a good drama, but it leaves too much unspoken to really get its message across.

‘Elles’ is one woman’s soul-searching, a reconsideration of her place in the world. We see what she “sees”, but what impact will it have on her? What choices will she ultimately make? And does the answer really matter, or is the question enough?