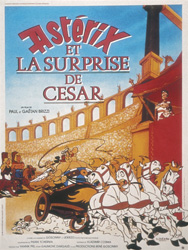 Synopsis: Obelix is madly in love with Falbala, Tragicomix’s beautiful sweetheart. However the Romans kidnap the two love-birds with the intention of gifting them to Ceasar during his Triumphant March. In their determination to find the two lovers, Asterix, Obelix, and their faithful dog, Idefix, sign up with the Roman Legion and even rent themselves out as gladiators. Based on Goscinny and Uderzo’s two comic books, “Asterix, the gladiator” and “Asterix, the legionnaire”.

‘Astérix et la Surprise de César’ is the fourth Astérix film in the series. It’s also the first one after René Goscinny’s passing in 1977 (which might explain why there was a massive 9-year gap between films!).

What the filmmakers decided to do here, for lack of any original material or the input of its creators (even Uderzo dropped out of the filmmaking business after Goscinny died), was to piece together the plots of two books into one: ‘Astérix légionnaire’ and ‘Astérix gladiateur’.

I haven’t read those books in ages, so I can’t offer insight into how well-constructed this pastiche is. Does it drop important elements? Does it merge elements that shouldn’t be merged? Does it invent bits to glue the disparate bits together, for lack of any other material? I don’t know.

However, from what I can tell, it looks like the books had very similar plots and were easily interchangeable:

‘Astérix légionnaire’: Obélix falls for Falbala, the chief’s niece. Unfortunately, she’s engaged to Tragicomix, who gets enlisted by the Romans and sent to Africa. Astérix and Obélix join the Roman legion in order to find and bring back Tragicomix.

‘Astérix gladiateur’: Assurancetourix is captured by the Romans and sent to Rome as a gift to Caesar. He will be fed to the lions in the circus, so Astérix and Obélix become gladiators to infiltrate their ranks and rescue their friend.

‘Astérix et la Surprise de César’: Obélix falls for Falbala, the chief’s niece. Unfortunately, she’s engaged to Tragicomix, and they are captured by the Romans and sent to Rome as a gift to Caesar. They will be fed to the lions in the circus, so Astérix and Obélix join the Roman legion and then become gladiators in order to find and bring the lovers back.

Hmmm… familiar, much? I can see why it would have been effortless to blend the two. But I wonder why they did.

The key problem, really, is in the animation. Although the film was released in cinemas in 1985, the quality of the work is a step back from the last one, ‘Les 12 travaux d’Astérix‘, with the characters being rendered slightly differently from usual and with slipshod paintings used as backgrounds. Let’s just say that it’s not an impressive-looking comeback vehicle after almost a decade of silence.

Be that as it may be, the end result is satisfying enough. Rooted in solid material, two of the early Astérix books, it’s filled with amusing tidbits throughout, somewhat maintaining the vibe that Goscinny and Uderzo aspired to with their original works. ‘Astérix et la Surprise de César’ may not be a classic, but it’s a pleasing 80 minutes of animated entertainment that young and old can enjoy.