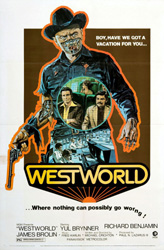 Synopsis: Boy, Have We Got A Vacation For You

For $1,000 a day, vacationers can indulge whims at the theme park called Westworld. They can bust up a bar or bust out of jail, drop in on a brothel or get the drop on a gunslinger. It’s all safe: the park’s lifelike androids are programmed never to harm the customers. But not all droids are getting with the program.

Michael Crichton (Jurassic Park, Twister) wrote and made his directing debut with this futuristic thriller that heralded moviemaking’s future as the first feature to use digitized images. Richard Benjamin and James Brolin portray pals confronted by a simulated reality turned real. And Yul Brynner is their stalking, spur-jangling nemesis. It’s man vs. machine – in a tomorrow that isn’t big enough for the both of them.

eyelights: the cautionary premise.
eyesores: the sometimes lack of sophistication.

“Have we got a vacation for you!”

West World is one of three fantastic resorts brought to life by Delos. Along with Roman World and Medieval World, West World attempts to recreate a defunct way of life in its most minute detail for their visitors – in return for the meagre sum of 1000$ a day each, of course.

It all hinges on the accuracy of the cities that Delos has constructed, and the robots that they have programmed; everything needs to feel authentic, down the behaviour of the resort’s permanent denizens. And that’s why they have teams working behind the scenes monitoring every aspect of these carefully crafted productions.

But what happens if they begin to find errors in the robots’ programming? What if the robots were infected by some unknown virus? What kind of impact might this have on their business or on their customers? And what if these behavioural bugs gradually increase in frequency and the robots become dangerous?

I loved the concept behind this film when I watched it. It was put together on the cheap by a lagging MGM and with first-time director Michael Crichton (who also wrote the script) at the helm. If the name seems familiar, it’s because he’s also the author of ‘Jurassic Park’, which bears no small resemblance to this particular creation of his – except that it has dinosaurs in it instead of robots.

The worst thing is that I didn’t even make the connections between the two. When I think of Michael Crichton, I think of the fabulously gripping ‘The Andromeda Strain‘, ‘The Great Train Robbery’, the vastly under-rated train heist film featuring Sean Connery and Donald Sutherland, and ‘Rising Sun’, an amusing -but oft-criticized- murder mystery featuring Wesley Snipes and… Sean Connery.

For some reason, though, I didn’t even think of ‘Jurassic Park’, even though I’ve seen Spielberg’s movie version at least two or three times.

Bu, now that my partner has pointed this out to me, all I can do is wonder what led him to write this picture and then recreate it in book form over 15 years later. Was he bereft of novel ideas? Was he contractually unable to transfer ‘Westworld’ to print because of all the rights issues – between the film at MGM and the paperback adaptation of his script he might have had his hands tied.

I may never find out. But I’ll forever be curious.

Until then I can safely say that I prefer ‘Westworld’ to ‘Jurassic Park’ (the movie, not the book – which I haven’t read). Even though it can be slightly simple-minded in its execution, at no point did I find it silly like I sometimes find ‘Jurassic Park’ – which is mostly about the thrill-ride than about anything else. I mean, it even has kids as central figures – it was clearly devised and marketed as a mass-market appeal picture.

Don’t get me wrong: the ground-breaking special effects remain notable. But the movie simply doesn’t awe me like it once did.

I suppose that the key reason that ‘Westworld’ connects with me more than ‘Jurassic Park’ does, despite all its flaws, is because it’s now closer to science fact than science fiction: whereas we are nowhere near dinosaurs cloning, robotics are making tremendous leaps, what with the advances in computer technology; it’s not as unfathomable that a park populated with robots might be in our near future.

So I’m guessing that this is what makes ‘Westworld’ trump ‘Jurassic Park’ for me. It’s certainly not the fact that it takes place in the Far West – I’m bored to tears at the mere thought of watching a western. And it’s not because it’s a superior production with superior direction – Spielberg’s picture wins hands down. Even the cast of ‘Jurassic Park’ is more varied and appealing.

In fact, ‘Westworld’ is a little light in the acting department, overall. James Brolin plays it a little loose in his part as a returning customer who brings one of his friends along. Richard Benjamin, who plays his buddy, isn’t worth mentioning.  The next most recognizable name is Yul Brenner, who plays a gunslinger much akin to the one he played in ‘The Magnificent Seven’ – except that he’s a robot and he doesn’t have to emote.

As a side-note, I’ve always wondered about the casting of Yul Brenner in ‘The Magnificent Seven’. It’s not that he wasn’t any good in it, it’s just that he doesn’t exactly bring the grit that John Wayne, Clint Eastwood or even Henry Fonda naturally infused their characters with. Can one even take the King of Siam seriously whilst donning a Stetson and gallivanting about the Old West?

I guess that it worked in the sense that he looked so comparatively unusual in West World, that it wasn’t hard to imagine him as a robot, as a fabrication. But it still defied credibility. And I found it hard to swallow that he would be able to traipse through Roman World without batting an eye, as though this were completely normal – even though he was only programmed for the West World environment.

In fact, the robots were slightly wonky in ‘Westworld’. They were programmed for authenticity, but were altered just enough to interact in a pleasing way to the visitors. For instance, the robots were designed to miss their targets/marks in duels or fights with the guests and to respond favourably to the guests’ advances – all of which flies in the face of the supposed authenticity of these worlds.

Furthermore, the robots looks human, but right below the surface is an artificial structure that one would easily feel and that would normally limit their expressiveness. Except that it didn’t: even though their faces are merely face-plates, they can express themselves naturally. And no guest every seems to notice that they don’t feel like flesh and blood, either. Now if only the circuitry was far below the surface,  and that there were lifelike layers above, I’d buy into it. But not as is.

Still, one can chalk all of that up to a crummy b-level production, something that can be overcome with a little imagination. What’s essential is that Crichton constructed ‘Westworld’ quite well, especially given that he was a first-timer: the opening sense of wonderment is instilled perfectly and the following suspense was built up in the correct fashion – slowly, methodically, then taking us to a frenzied finale.

And he did a great job of establishing the setting. Crichton was right in starting off with a Delos TV ad because it was a quick primer that showed us what takes place and what is available in this fantasy world. Then he took in each of those worlds concurrently, giving us a taste of how they worked through the eyes of various guests – even though our two protagonists remained in West World.

I really loved seeing what was going on in all three automaton worlds, but I particularly enjoyed all the behind-the-scenes stuff with the technicians and programmers as they get the place running and try to debug the problems; it gave us insight on how decisions were made, and it also offered us early warnings about the dangers that were unfolding. That was a nice touch, I think.

And, of course, there’s the concept. I love the fantasy itself (I mean, who wouldn’t want to travel through time and experience the world as it once was, and without the risks?), but I also really dug Crichton’s prescient cautionary tale – especially in a present that is super-connected and that is constantly under threat of viral infections. Not only was it visionary but it’s now topical – something you can’t always expect from science fiction. Delos resorts don’t yet exist, but Crichton was right about the risks of computer viruses. Not bad for a first time writer-director.

All this to say that, despite its numerous weaknesses, I was quite pleased with ‘Westworld’. Crichton showed a steady hand in his first directorial effort and he created a world that was unique and fascinating – one that teases the imagination and leaves one’s mind wondering and wandering. It’s not high caliber entertainment, of course, but it has enough to make it enjoyable upon more than one viewing.

Frankly, I would really love to see a properly produced remake come to light someday. Is Spielberg available?

One response to “Westworld”