Synopsis: Patrick Bateman (Christian Bale) is a Wall Street yuppie, obsessed with success, status and style, with a stunning fiancée (Reese Witherspoon). He is also a psychotic killer who rapes, murders and dismembers both strangers and acquaintances without provocation or purpose. Based on the controversial novel by Bret Easton Ellis, the film offers a sharp satire to the dark side of yuppie culture in the 80s, while setting forth a vision that is both terrifying and chilling.

eyelights: Christian Bale. the social commentary. the jet black humour. the soundtrack.
eyesores: the brutal scene with the prostitutes.

Patrick Bateman: “There is an idea of a Patrick Bateman; some kind of abstraction. But there is no real me: only an entity, something illusory. And though I can hide my cold gaze, and you can shake my hand and feel flesh gripping yours and maybe you can even sense our lifestyles are probably comparable… I simply am not there.”

I’ve never read Brett Easton Ellis’ novel ‘American Psycho’. In fact, until this movie came out, I had no idea that the book existed. I knew of Ellis, however: I had seen ‘Less Than Zero’ and had subsequent listened to the audio book version. A part of me had found it too grim, maybe even morally bankrupt, so I had never explored Ellis’ other works.

I hated the title ‘American Psycho’ when I heard it. As a fan of the ‘Psycho’ series of books and films, I ignorantly thought that this was merely a cheap ploy to piggy-back on the successful franchise. When I heard that this movie was coming out, especially given the attention it was getting for being one of Leonardo DiCaprio’s next projects after ‘Titanic’, I was dismissive.

By the time that we got a copy at the video store where we worked at the time, my opinion had softened a little bit. I had heard terrific things about Christian Bale’s performance, and the film was getting pretty good reviews overall. Since I had a tendency to see just about everything that came through the store (even the really crap titles) just to properly assist customers when they came in, I decided to give it a chance.

It blew me away. I was naturally impressed with Bale’s phenomenal performance (I didn’t realize that he wasn’t North American until I watched the behind-the-scenes featurette and heard his accent!), but I loved the whole social satire of the picture – even though it takes place in the late ’80s, everything that it broaches was as applicable -maybe even more so- a decade later. And even today.

Of course, I was embarrassed to champion it until I discovered that I was not alone, that there were other fans of the film. I thought that people would see me as a complete nutjob for being a fan of a movie about a brutal serial killer, I imagined that people would judge me, perhaps even question my own morality. And yet the picture is about much more than just a serial killer; it’s about the effect of social pressure and the desire to belong, to fit in.

What we find in ‘American Psycho’ is a character so bent on being with the “in crowd” that he is bereft of his own personality. He can authoritatively speak a social conscience that he lifted from op eds, he can express a refined taste that he borrowed from connoisseur magazines and he can reference pop culture by regurgitating the latest reviews word for word, but he has no opinion and thought of his own. He is, in actuality, a shell.

And this is what makes ‘American Psycho’ so fascinating. From an outsider’s perspective, Patrick Bateman looks typical of anyone in his social circle, but the audience is privy to the other side of Bateman – a person falling apart on the inside, unable to maintain appearances without cracking. This is why he starts to fantasize about acting out violently and then eventually starts to lash outwards at a world that has pressured him so much that he wants to destroy it.

What is also great about the film is that, not only does it comment on conformism (the classic business card sequence always resonates with anyone who sees it), but it also questions his sanity to the degree that neither he or we are entirely sure that what is happening is real. It all looks quite real, much like Bateman looks real to an casual observer but, scratching the surface, we discover that everything we see could actually all be in his head.

Has he actually committed the atrocities that he gradually feels more and more compelled to commit? Has he completely lost his perspective on reality and has been living this madness in his mind only? Could it be a combination of both? Or could it even be that his growing bloodlust has been concealed by a society that seems to wipe the slate clean for those of a certain strata – that his actions will be hidden to sustain the status quo?

It makes one watch the picture with a different set of eyes every time after the first. Initially, one watches ‘American Psycho’ more subjectively, experiencing it as something new – not just as a film, but as a genre. After the first time, however, one can watch it repeatedly and try to deconstruct it each sequence to ascertain what is real and what isn’t. From that perspective, it’s one of those films that keep giving.

The humour alone makes it enjoyable upon repeat viewings. The ridiculousness of Bateman’s obsession with appearance, the manner in which he behaves in order to belong, and the way it all crumbles when he is taken by surprise, when the script is suddenly changed before his unsuspecting eyes – unprepared, he tends to crumble and rambles off incoherence that is nothing short of hilarious (his biggest crutch: telling people that he has to go return videos!).

The one thing that makes the film less palatable is its depiction of violence. While it is neither gratuitous or especially explicit (there have been worse films before and since), it can be brutal in some instances; I would be loathe to recommend the film to the faint of heart. Actually, despite having seen the film at least a half-dozen times since its release, I still shudder at the mere thought of the sequence in which he brutalizes a couple of prostitutes – while we don’t actually see it happen, we see the aftermath and it remains jarring each time.

Despite its valid social commentary and the deliciously deep black humour, ‘American Psycho’ is not a film for all audiences; it can be hard to watch. It comments on some of the same issues that a film like “Fight Club’ does, but it does it in a less accessible or sensational fashion – it doesn’t turn it into a cartoon of reality. What ‘American Psycho’  does is put a spotlight on the blemishes of a society that is rotting from the inside, commenting that appearances mean little when it’s all hollow and barely kept together.

If anything, it provides at once a cautionary tale for individuals and the collective: there is danger in not rooting ourselves in deep beliefs and values, in only paying lip service to illusions, to what is expected from others. If anything, it’s a reflection of a North American mentality that, if taken to a certain extreme, can lead to a corruption of the spirit and massive psychosis. ‘American Psycho’, in its guise as a an art house horror film, actually discusses these issues with the utmost skill; there is a method to its madness.

Patrick Bateman: “I have all the characteristics of a human being: blood, flesh, skin, hair; but not a single, clear, identifiable emotion, except for greed and disgust. Something horrible is happening inside of me and I don’t know why. My nightly bloodlust has overflown into my days. I feel lethal, on the verge of frenzy. I think my mask of sanity is about to slip.” 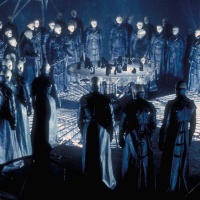