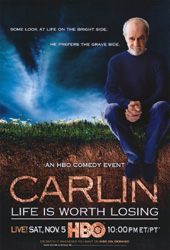 Synopsis: George Carlin returns to the stage in Life is Worth Losing, his 13th live comedy stand-up special, performed at the Beacon Theatre in New York City for HBO®.

Carlin’s spot-on observations on the deterioration of human behavior include Americans’ obsession with their two favorite addictions – shopping and eating; his creative idea for The All-Suicide Channel, a new reality TV network; and the glorious rebirth of the planet to its original pristine condition – once the fires and floods destroy life as we know it.

George Carlin: Life is Worth Losing 7.25

“I don’t think a writer could ever commit suicide. Do you? A writer would be too busy working on the note all God damn year. Trying to get it just right. First draft, second draft, third revision, whole new ending. Finally, he’d turn it into a book proposal and have a reason to live.”

Whereas he had become quite angry and disillusioned in recent years, taking shots at everything within range, by the time he put this show together he had become particularly morose. One only had to look at the stage set, which is a cemetery plot abounding with tombstones to get a sense of the mood.

I don’t know what happened in the four years since his last special, but his health had clearly deteriorated; he looked haggard, had less vitality. He commented on having been sober for 341 days, which means that he had fallen off the wagon again only to get back up. Something was evidently up with George.

But his writing was sharper than ever. Instead of writing short segments of approximately 10 minutes a piece, he ended up putting together a full-length show with very few seams showing between each bit. It’s a very cohesive whole and, in that sense, it may very well be his best written show.

The problem is that it was not nearly as funny as any of his previous ones. If anything, one gets the sense that Carlin got on his soapbox and decided to vent for a while, that he had an agenda other than making the crowd laugh. And it worked, because that audience was probably the most silent one I’ve heard for one of his performances.

Bizarrely enough, it’s also his longest show in 30 years. While the others all clock in at an hour, give or take, and were sometimes padded with intros, this one is all-Carlin for a whopping 75 minutes! Perhaps it was due to being in absentia for an extended period of time, but he certainly gave fans their money’s worth.

Still, it was a heavy show, and not all fans must have been pleased with his oppressive cynicism: instead of railing against the government, a staple of recent shows, Carlin was now beating down on American society itself. And he spent a lot of time discussing suicide and how -in his opinion- pathetic and degenerate the human race actually was.

So, ‘Life is Worth Losing’ is not exactly a gas in the way that previous Carlin shows were. It hits its targets on all counts, and it stands as one of his best on a purely technical level, but it misses the mark on the level that likely matters most: sheer laughs.

Thus I have to rate it from two perspectives: From a quality standpoint, it rates a solid 8.5. But from an entertainage standpoint, it offers a mere 6.0. So I offer an overall rating of 7.25. 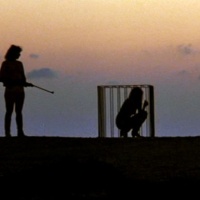