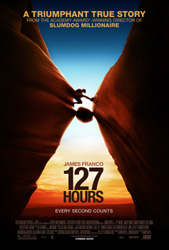 Synopsis: There is no force more powerful than the will to live

Not that I didn’t think he could do it -the guy is mad-talented- but he managed to put together a tense, gripping motion picture that, for the most part, features one guy stuck in one place and trying to regain his freedom. It’s a survival story with nothing much more than one man and his will to live.

This could have been both unforgivingly long and/or needlessly emotional, but Boyle kept the picture moving by inserting flashes of memories, wishes, dreams and hallucinations into the tale. All of this was done concisely, without taking away from the drama at the heart of the piece – he knew exactly how to strike the right balance.

It’s also a tribute to James Franco, whom I typically have a difficult time giving credit to. In my estimation, despite his pretensions to being intellectual and artsy (shades of Ethan Hawke

), he has a nasty time convincing me of his thespian qualities – he often has a smirk just beneath the surface, giving one the impression that he’s about to laugh. He tends defies all credibility.

However, in ‘127 Hours’, he manages to transcend that goofy frat guy and/or pothead image and gives us a more three-dimentional character, a human being with real emotions, aspirations, intelligence, fibre, tenacity, and hope. Between his devotion to the role and Boyle’s skilled direction, they managed to deliver an unbelievably engaging portrait of a survivor risking everything and coming out of it changed.

My only problem was in Boyle’s penchant for speeding the proceedings up or doing jump cuts at times, likely for stylistic reasons. While his technical finesse worked in some areas, especially once our protagonist is stuck with nowhere to go, it didn’t have a place in moments when the tedium of climbing should have been left intact. Still, there were some truly original shots or perspectives that only he or David Fincher would come up with. Quite nice.

By the time ‘127 Hours’ wraps up, I actually wept with relief. I needed release. This doesn’t happen a lot, and certainly not for this type of picture, but there was something so touching about this man’s story that I couldn’t help myself. Not only was I impressed with his attitude in the face of certain death, but he never lost sight of himself – and yet came out irrevocably changed, seemingly stronger than ever.

How this film didn’t win the Academy Award for best picture is totally beyond me – especially since this is based on true story, an Academy preference, it seems. Admittedly, there was fierce competion that year, what with opening up the nominations to ten pictures, but ‘The King’s Speech’ pales in comparison to what Boyle achieved with so little.

Don’t get me wrong, ‘The King’s Speech’ is a wonderful film. But ‘127 Hours’ is far more memorable, and I was much more impressed with its achievements than I was with that year’s winner. While ‘127 Hours’ doesn’t have tons of replay value for me, I wouldn’t hesitate to recommend it to most viewing audiences.

Post scriptum: In the future, I might be tempted to double bill this with ‘The Descent’. Fact before fiction. Reality before the incredible.