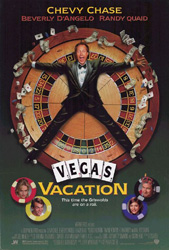 Synopsis: This Time the Griswolds Are on a Roll.

When Clark Griswold puts his mind to something, we soon realize he hasn’t got one. Still, nothing stops him when the vacation bug hits. This time he’s chosen Las Vegas, the family entertainment capital of America!

Before I babble on about ‘Vegas Vacation’, let me start by making a couple of admissions:

-I had already seen it before many years ago, was bored to tears, and never had the intention of seeing it again. The only reason I revisited it is because it is part of the National Lampoon ‘Vacation’ 4-movie pack and I wanted to finally put the set to rest.

-I have an utter dislike of gambling and the existence of Las Vegas is revolting to me. Gambling, to me, is nothing but a fool’s proposal; the idea that Lady Fortune would grace me with more attention than another, that I would beat unfathomable odds and win massive amounts of money by PLAYING GAMES, is ridiculous at best.

To me, games are meant to be fun. It should be something that taps into the playfulness we bury deep in ourselves daily with our various responsibilities. It really would take adults to spoil the purity, the joy of games, by wagering on them, by including an element of risk that only serves to add to our personal anxiety, not release us from it.

To me, gambling is not better than prospecting. Most people wouldn’t do it because it seems like a crazy thing to do, to devote so much time and effort to. But, if you made prospecting look glamourous and appealing, then I have no doubt that a lot more people would do it – despite the personal toll it would take and the minimal return.

This particular rant comes from someone whose closest friend was a long-time croupier by profession and found the environment so heavy, watching people throw away their livelihood day in day out, that he had to run to the hills and start his life over. He simply could not handle the emotional toll that it took on people. I heard the stories quite regularly; I doubt one could call me sheltered.

Basically, what I’m trying to say is that this picture had the odds stacked against it in the first place, before I even sat down to watch it. I already knew it would be even less of a classic than its fore-runners, and I knew that the gambling-related humour would leave me cold – after all, if anything, I find gamblers pathetic more so than hilarious; I wouldn’t laugh at them so much as pity them.

And, between the lacklustre performances from Chevy Chase et al, and the unbelievably middle-of-the-road, clichéd-riddled script, there wasn’t a whole going for it. It’s simply not a clever, funny or original film. None of the cameos by Las Vegas greats such as Sid Caesar, Wayne Newton and Sigfried and Roy could make up for it either – after all, they’re performers, not actors, so they mostly couldn’t hold up their end.

In fact, it gave me the impression that the film was made with Vegas money, that it was essentially one huge advert for Sin City, that ‘Vegas Vacation’ would not have happened if the big casinos and big Vegas names hadn’t been lined up for it. It’s likely not the case, but you can never tell – money will buy anything, even a feature-length ad passing as a motion picture.

Because, let’s face it, as far pictures go, ‘Vegas Vacation’ has very little going for it. There’s not much reason for it to exist, other than to continue the adventures of the Griswolds, to drag on this tepid series in the vain hope of cashing in some more. Problem is that the only winners in this game are the big shots in Las Vegas – not the filmmakers, definitely not the actors, and most certainly not the audience.