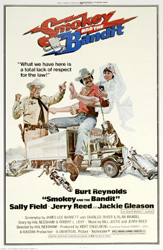 I remember seeing a Burt Reynolds film full of cars on TV when I was a kid. I never saw all of it – only bit parts of it. Truth be told, I never really was curious to see the rest, even though I seem to recall a certain amount of giddiness at what I’d seen.

Fuelled by a small amount of nostalgia, my curiosity was piqued just enough that I decided to take that leap and finally check the movie out once and for all. I’m no fan of cars, car chases or car-related films (I doubt I’ll see the ‘Fast and Furious’ films, for instance), but I decided to take the plunge anyway.

Little did I know that the film I had really been looking for, a madcap romp of dozens of stars in cars, was ‘The Cannonball Run’.

Instead, I got ‘Smokey and the Bandit’, a mildly enjoyable hick fantasy about a roadway outlaw who races across the country to make a beer delivery, all the while avoiding the law through various tricks and stunts. That is, until he gets saddled with a runaway bride who also happens to have a tenacious sheriff on her tail.

I was surprised by how unfunny ‘Smokey and the Bandit’ was. It’s clearly meant to be quite light, perhaps even an action-comedy hybrid, but there’s sparse humour in it, and very little of it were clever jokes or gags. It’s as though they weren’t even trying.

As for the film itself, our heroes go from point A to B extremely quickly, enough so that I couldn’t help but wonder what they’d do for the rest of the picture. It turns out that the journey from point B back to A is the centrepiece of the film. Most of it are long stretches of driving around, however; let’s just say that it would be boring for anyone who hates road movies.

The cast was decent enough. Burt Reynold has a nice twinkle in his eye and commands the screen somewhat well; I can see why he was a star for a few years during that point in time. Jackie Gleason did his best to be funny, playing a small-time sheriff with a big-time ego and little class or brains. Seriously, I wouldn’t have recognized Gleason if his name wasn’t in the credits. Wow. He looked very different from his “The Honeymooners’ days.

There was one key element of miscasting, however. While I found Sally Field alright in her part, I had a hard time imagining her as the character of the runaway bride. It doesn’t change the fact that her performance is the best of the bunch (it’s hardly surprising, given the overall calibre!

), but she didn’t convince me. However, it was nice to see a sweet-looking woman like her get the part of “the girl” like that – nowadays, it would have to be some Playmate type instead.

Amazingly enough, the filmmakers must have known that they had a hit on their hands, because they set up the picture for a sequel at the very end, sending The Bandit out for another run right after finishing this one. The film was, in fact, extremely popular at the time, and it’s a role that Reynolds will always be associated with.

Personally, I can’t really say that I’m interested by a sequel, although I am curious to see what they’ll come up with next. I mean, how could they milk this concept any further?

Having said that, I’d love to see a modern remake of it with Sean William Scott in the role of The Bandit – he may not be a modern equivalent of Burt Reynolds, but he can channel the necessary aloofness, self-assuredness and humour to pull it off.

On that note, I suppose that my new quest is to find myself a set of the ‘Cannonball Run’ trilogy. I don’t know if it exists as a package, but I will try to find one. At the very least, I will pick up the original film in the series and revisit some long lost childhood memories. I know that it won’t be a great film, but maybe it’ll be nutty enough for me to enjoy. 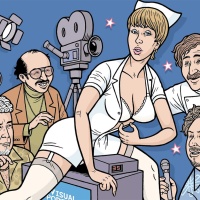 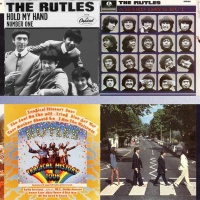