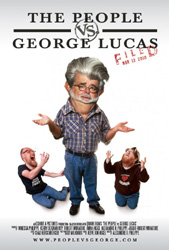 Synopsis: The passion the original Star Wars trilogy inspires in its fans is unparalleled; but when it comes to George Lucas himself, many have found their ardor has cooled into a complicated love-hate relationship. This hilarious, heartfelt documentary delves deep into Lucas’s cultural legacy. Utilizing interviews taken from over 600 hours of footage, and peppered with extraordinary Star Wars and Indiana Jones re-creations lovingly immortalized in song, needlepoint, Lego, claymation, puppets and papier-mâché, above all this film asks the question: who truly owns that galaxy far, far away-the man who created it, or the fans who worship it?
***********************************************************************

The People vs. George Lucas 8.5

I am one of those people who grew up loving ‘Star Wars’, whose imagination was captured by the original trilogy. Some of my most potent childhood memories relate to the films in some fashion, and it was dear to my heart… until 1997 – that is, when the so-called “Special Editions” came out.

This documentary was made for the likes of me.

And there are tons of us. Every day, on message boards everywhere, people are dissing George Lucas for all the changes that he keeps making to his films. He’s because a bitter punchline whenever anyone considers messing around with a piece of art – especially given that he used to rightly argue that no one should be allowed to alter our cultural heritage, and because he steadfastly insists on erasing the past by preventing the original versions of his works from being released.

Between the “Special Editions” that sometimes severely alter the classics that I knew and loved, the prequels that had a few awesome moments outmatched by an overwhelming number of über-moronic ones, and Lucas’ arrogant stance about the originals (read: non-specialized) films, I’m actually sick to death of the Star Wars series – so much so that I don’t even feel like watching the movies I’d seen countless times and couldn’t get sick of.

The problem is that when I watch them now, so much baggage is attached to them that it spoils my enjoyment. So I’ve actually come to enjoy anything satirising the series, such as the brilliant’ ‘Troops’ short, or even the straight-out parodies, such as the ‘Family Guy’ or ‘Robot Chicken’ ones. They’re not all inspired, but it gives me a way to reconnect with some cherished memories, all the while deflating my resentment with a little bit of humour. It’s not much, but it permits me to keep Star Wars alive in some fashion.

The original films aren’t available in anything short of shoddy quality right now, anyway. There’s no way any of us can recreate the experience of watching them on the big screen, because the closest thing to is a dated transfer used for the laserdiscs some twenty years ago, but re-released on DVD approximately 5 years ago. The best quality versions that we have access to these days are leaps above this laserdisc transfer, but, sadly, they’re the ever-devolving mutations that have been escaping Lucas’ diseased mind every few years since 1997.

(Don’t even get me started on the “extra-special editions” that he’s released in recent years!

At this point, the films resemble their original selves about as much as the 1989 Michael Jackson looked like the 1979 Michael Jackson, before all the plastic surgery; you can sort of recognize them, but it’s not really them. And that makes them hard to love – especially given that most of the changes weren’t improvements. Unfortunately, Lucas, like MJ and Joan Rivers, is addicted to this “plastic surgery” and can’t seem to stop putting the films under the knife. I’m very much afraid that the movie will end up looking like the 1999 version of Michael Jackson. Or worse: the 2009 Michael Jackson.

So it was a real blast to watch fans of all walks of life, from around the world, talk about the impact of the films and the even larger impact of everything that Lucas has (un)done from 1997 onward. From the Average Joe to nerdlings to critics to authors to directors and producers and back again, we are privy to tributes to Lucas, adoration for the series, as well as disappointment, frustration, and even their all-out anger at the way Lucas has handled his indefatigable cash cow in the last 15 years – how he has turned to the dark side, if you will, by becoming the corporate behemoth he once loathed.

It’s not necessarily a b!tchfest, per se, and it does try to give us both sides of the equation to provide perspective, but ‘The People vs. George Lucas’ is chiefly about the people who, like myself, wish that they could simply have their fond memories back. We are countless, and some are more obsessive than others, some take it quite personally and needlessly spew a tremendous amount of bile and vitriol. Thankfully, we also get to see the humourous side of the equation as well, and discover that some people have found their own ways to cope – like re-editing the films by themselves.

‘The People vs. George Lucas’ doesn’t offer any solutions or come to any conclusions – it mostly serves as an account of what’s happened in the last decade and a half and, for all intents and purposes, tries to send a message to George Lucas on behalf of the throngs of beleaguered fans of Star Wars. It builds its case with hard facts, raw data, but also with raw emotion and plenty of pleasantries along the way. One would dare hope that Lucas will someday watch this and realize that maybe some of them have a point. In all seriousness, when even some of your closest friends shake their heads at what you’re doing, you should probably listen a little bit.

(As a side-note, ‘The People vs. George Lucas’ was originally released in 2010, and Lucas released a further bastardised edition of his trilogy in the fall of 2011. So, either he hasn’t seen it yet, he doesn’t give a crap about the fans and listens to no one but himself or he’s an evil leprechaun having a few laughs at everyone’s expense. Personally, I think that he’s delusional, because the tweaks he keeps making are in such poor taste that he must have taken leave of his senses. Are his motives artistic, autistic, or corporate? We may never know…

As you may have surmised, I had a lot of fun watching this documentary.

But, on top of being a blast, it was to the point, covered a lot of ground and gave a great overview of the state of things so that even a novice would understand – without bringing in too many superfluous elements. From an objective standpoint, I’d say it’s quite a good film: it manages to document quite efficiently the pop culture tug-of-war between a creator and his creation’s devotees.

As for myself, I completely understood these Star Wars nerds’ grievances. Even though many of them took it further than I could ever fathom going, I could relate with them to some extent. So, for those 90 minutes, it felt as though I was connected in some intangible way – perhaps not by an invisible energy field that surrounds us and binds us, but by a bond that George Lucas could never have imagined in his pompadoured inflate-a-head. 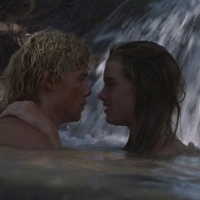