After watching a whole bunch of less-than-stellar Captain America material (including the 1944 serials!), I felt that it might be a good time to tackle some of the lesser Marvel superhero films. I figured that the contrast might help elevate my enjoyment.

Nothing could ever help ‘Daredevil’ or ‘Elektra’, so I watched ‘Fantastic Four” for the second time.

The acting is average. No one leaps off the screen here, not even the villain. Chris Evans plays in the Tom Cruise range, as he frequently does (not always, thank goodness, but often), Jessica Alba is alright and those other two guys are too. I don’t know who they are these other two, but they really scuttled their chance to distinguish themselves, didn’t they?

The writing is poor. Everything is tossed together in a blender, effortlessly; it feels very paint-by-numbers. Basically, what you get is a tad better than a TV movie would be. And it’s a shame, too, because it’s one of Marveldom’s most notable characters, and it’s an origin story. We should be getting better than this.

But this is a 20th Century Fox production. And, aside from the original X-Men trilogy, they pretty much ruined Marvel superheroes. The X-Men were likely saved by Bryan Singer, ’cause Fox couldn’t make a sensational superhero film if their bottom line depended on it.

Thus we got a cardboard cutout film. Even the special effects aren’t so special. They would have been impressive a decade earlier, but by 2005 we had the ability to do better and it’s all lackluster – the motion, the rendering, the blending in with the real stuff. It’s certainly not up to par with the best of the best.

But what really got to me was their version of Dr. Doom. Could they possible have ruined him MORE?! Not only is he NOT shown as an intellectual equal to Reed Richards (he’s a corporate mogul here!), but he’s affected by cosmic radiation just like The Fantastic 4. So he doesn’t wear an armour that he designed himself – he TURNS INTO METAL. WTF?

It may not seem like much, but this new origin changes the dynamic between Von Doom and Richards and it completely changes Doom’s purpose. It also diminishes him as just a businessman with powers who cares only about his self-interest. The original Doom was a mad genius who was out to take over the world. Um… a little different. Plus now he’s a metal dude (oh yeah, I already said that!)

Otherwise, I liked the main characters, even if the actors did nothing to flesh them out. At least they didn’t take FROM them. Reed Richards, Sue Storm, Johnny Storm and Ben Grimm all appeared more or less as I remembered them. Except that Sue Storm is maybe a bit hotter. Boy does she make that jumpsuit look good (well, so does Johnny Storm, frankly, but the appeal just isn’t the same)

In short, here are the main strengths and weaknesses of the film:

MINUS:
-the corporate flavouring given the Von Doom and Reed characters. Couldn’t they just be rich from their inventions, like in the original comics?
-since when is Dr. Doom a frickin’ mutation? This origin story is a blasphemy!

PLUS:
-Jessica Alba looks great in a jump suit! Wowee!

Otherwise, everything else is pretty much par for the course. If you like superhero films, then you’re well served. If, by well-served, you mean with warmed up leftovers – something overly familiar that will provide absolutely NO challenge to your tastebuds or make you discover a new flavour.

‘Fantastic Four’ is hardly a masterpiece, but it’s less farcical than ‘Iron Man’. What ultimately makes it less palatable is the character of Von Doom, which basically ruins everything. If not for this, I would probably have given the film a 7.75 or so (which, in my scoring system, is a HUGE difference – the difference between “so-so” and “kinda good”).

Perhaps it would fly more with people not familiar with the original characters? 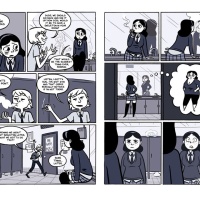