Lemmon frantically portrays Harvey Fairchild, a wealthy California architect, father of three successful children, husband to a beautiful wife and neurotic as hell. Confronted with his 60th birthday, Harvey is coming down with a severe case of male menopause. Julie Andrews is Gillian Fairchild, the loving, supportive wife of ranting Harvey. Gillian’s got her own problems: she’s nervously awaiting the results of her hospital tests. One daughter is going through a breakup, the other is seven months pregnant…and son Josh has brought home another brainless beauty.

Featuring Jack Lemmon and Julie Andrews, ‘That’s Life!’ is a pretty straight-forward, decent drama with minor touches of humour along the way. In it, Lemmon plays an insufferable older man who is creeping up on 60 and finding it difficult adjusting to the idea. He is certainly not aging gracefully, and his poor wife endures an incessant stream of grumpiness and whininess.

I get the feeling that Blake Edwards was getting disillusioned with life, ‘cause a large chunk of his late ‘70s to late ‘80s films have a bitterness to them that I don’t recall seeing in his earlier output. Was it self-reflective, or semi-autobiographical, as some artists (of all genres) tend to do? Was he trying to send the world a message? Or was he finding humour in things that can be difficult to bear for others?

I don’t know. But, whatever the case may be, it’s a well-constructed little film. I just wouldn’t recommend it to everyone, seeing as Lemmon’s character may test one’s patience.

As for me, I will no doubt watch it again someday – it serves as a reminder of what I don,t want to become, as I grow older and get closer to the end than to the beginning. 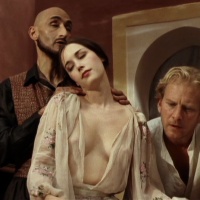