After wreaking grisly revenge on the men responsible for her father’s murder, Kitty (Chingmy Yau) is on the run from police when she is taken under the wing of a professional hit woman, Sister Cindy (Wai Yiu), who trains Kitty in the exotic art of murder and gives her a new identity. However, her new boss has no idea Kitty is flirting with danger, having fallen in love with Tinam (Simon Yam) the policeman investigating the series of gruesome murders she committed. Not the least of their problems, when one of Sister Cindy’s ex-students, the ruthless Princess (Carrie Ng) and her lesbian lover Baby (Madoka Sugawara), are hired to murder her it leads to an electrifying showdown between the four beautiful and deadly assassins.
***********************************************************************

So outrageously cheesy that you can’t help but laugh and love it. They were obviously having fun with this film – not taking themselves too seriously, but also trying to be entertaining at the same.

It worked, but I think one needs to be familiar with Hong Kong films of the era to properly appreciate it. It’s reminiscent of John Woo’s film of the era, but without his flair and skill. Anyway, I think it’s rather enjoyable, for what it is.

On a purely technical level, however, it rates a 4.0: the script is relatively weak, the acting is over the top, the editing isn’t super great and the action scenes are cobbled together with enthusiasm more so than skill.

Still, if one wants to see a truly kitschy version of ‘Basic Instinct’ (the graphic sex being replaced by ’90s TV erotica), this one is hard to beat. I actually had a good time and would watch it again. 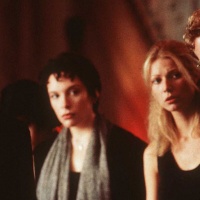