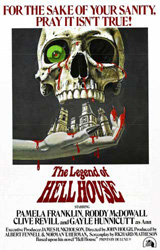 Synopsis: Leave your sanity on the doorstep!

It sits here, shrouded in mist and mystery, a nesting place for living evil and terror from the dead. It’s Hell House. Roddy McDowall heads the cast of this exciting chiller about four psychic investigators and the dark, brooding mansion they themselves call “the Mt. Everest of haunted houses.” It’s already destroyed one team of researchers. Now this brave quartet ventures in for another try at unraveling its secret. But before they succeed, they must suffer through madness, murder and everything else the spirits that dwell here have in store for them. Yet learning the truth just might drive them all insane. An ingeniously-devised ghost story, The Legend Of Hell House will thrill and delight veteran horror fans from the first creaking door to the very last slithering shadow.
***********************************************************************

The Legend of Hell House 7.5

The Legend of Hell House: I had seen this DVD on the shelf so many times but, with a preposterously pretentious title like this, I simply couldn’t take it seriously enough to consider watching it. It really felt like they were trying a little too hard (I mean, really, “Hell House” is pretty dramatic. Add to this the presumption that this is a tale of legend, and you’ve completely lost me).

Then I saw the trailer for it on another DVD. It was eerie, and it gave the impression that it would have a bit of a psychedelic, fantastical quality to it. I like those elements in horror films, so I reconsidered my position and picked it up at the earliest, but cheapest, possible moment. I still had no real idea what it was about, as the trailer reveals very little, but I liked its tone and, based on the title, I hoped that it might fall somewhere along the lines of ‘House on Haunted Hill’ or ‘The Amityville Horror’.

The gamble paid off: it turns out that it’s a relatively effective paranormal frightener, even if it’s not super scary or gory; the scares are mostly traditional, with the music, noises, psychological torment, …etc., being the core of the spookiness (as opposed to gore or violence, as with some films). The style is very ‘70s, so it made me think of a haunted house story crossed with ‘The Exorcist’ for style and ‘Poltergeist’ for substance.

The cast is decent enough. I don’t recognize any of them with the exception of the ever-tortured Roddy McDowall (who, it must be noted, is casually slipped into the mix and effortlessly blends in), but they all perform agreeably, if a little plainly. The setting was also well chosen; it almost all takes place in an old-school British manor that is absolutely perfect for a little dalliance with the afterlife.

However, the film ended up being slightly disappointing: unfortunately, it so happens that the trailer showed all the best bits in the span of 90 seconds’ time. Which, in turn, left the film to spread these out over the course of 90 minutes – making the lulls almost unbearable at times. It’s likely that my reaction is simply a case of initial expectations undermined by reality, so I’m sure the second viewing will be more enjoyable.

Still, for now, I have to temper my enthusiasm for the end product and simply say that ‘Hell House’, while entertaining, is hardly legendary.