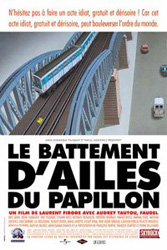 Synopsis: What if… everything happened for a reason? What if… love came knocking at your door? What if… the slightest twist of fate changed your life? While riding the train to work, store clerk Irene (Audrey Tautou) learns from a fellow passenger that her horoscope predicts she’ll meet “the love of her life” that day. After she leaves, the young man who had been sitting across from her reveals he shares the same birthday, and perhaps the same fate. Though separated once she exits the train, unrelated characters and events seemingly conspire to bring the two together again. If the moon hadn’t been full, if it hadn’t been raining, if she hadn’t been fired, if the husband hadn’t been stolen, if noses hadn’t been broken, if the coffee maker hadn’t been mistaken for a bomb… if all of these things and more didn’t happen… they never would have met.

‘Le battement d’ailes du papillon’ tackles the concept of the butterfly effect, wherein one small, seemingly innocuous, event can alter the course of grander events. It’s an interesting concept and, personally, I’ve long believed that there is something to the snowball effect of even the littlest of our actions.

Oh, sure, this theme has already been done fairly frequently in science fiction (Back to the Future, The Butterfly Effect, A Sound of Thunder, …etc.), but this French film tackles it more soberly, in the context of romance – and from a dramatic standpoint, no less.

Thus we follow the lives of a half-dozen main characters, as their lives intersect and impact each other in unexpected ways. It all plays out very well, even if the structure is perhaps a little uneven at times, and watching the characters’ lives unfold is an effortless joy.

I should note, however, that none of the characters are overly sympathetic – they all have their various frailties, inadequacies and flawed visions. But they all feel very real in their own right; none of them seem like a caricature or cliché, even if the situations they find themselves in seem sometimes a smidge overdone.

All in all, it’s a very nice film: it has comedy, romance, drama, beautiful scenery, an enjoyable story, and interesting characters. Fans of art films or European cinema should appreciate this hidden gem.