A whistling overture… its echo is strangely soothing.

From the opening number, “Lovely Head”, to the final notes of “Horse Tears” this album takes the listener on a beautiful melancholic trip.

It is replete with sadness, tenderness, and a euphoric quality that would be very à propos in a cloudy haze of smoked herb. Yet there is also a livelihood, ecstasy and sultriness inbibed in numbers such as “Human” and “Utopia” that are palpable and extremelly inviting.

To think that their follow-up, ‘Black Cherry’ was so deprived of such warmth that I had almost written off Alison Goldfrapp and company.

Almost, because I evidently still felt compelled to give them another chance, knowing that their reputation was formed on this first disc. It was clear that the duo had gone down a different route for their second album, so logic dictated that perhaps the first would be more to my liking.

Good choice: it just might be the #1 for the year, surpassing tremendous offerings by Madonna and Fields Of The Nephilim.

It’s unlikely that their latest, ‘Supernature’, which came out only a few weeks ago, would ever recapture the magic of ‘Felt Mountain’, but now the door is open wide. Even their soundtrack to the movie ‘My Summer Of Love’ seems like a good bet right now – in spite of the fact that it repetitiously also starts with “Lovely Head”.

Granted, it’s an undeniably charming number, but it feels like it can only belong at the top of ‘Felt Mountain’; it has such a distinct opening lick that it’s like an anthem or signature for the album. And everything that follows is simply a natural extension of these precious moments.

Perhaps this is why the album flows so well: step by step, this aural dance gracefully sweeps you through the nigh and leaves you breathless. Even the casually carnivalesque piece “Oompa Radar” feels right at home, despite standing out from the rest of album like a mildly surrealist nightmare in an otherwise relaxing haze of sweet dreams.

All in all, ‘Felt Mountain’ is a truly delicious psychedelic trip. It transports the listener from one lovely high after the other without stretching time to infinity; it knows that all journeys must come to an end, but it cautiously makes every minute of sightseeing noteworthy. 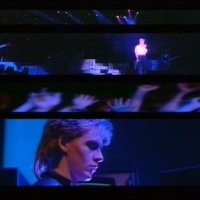