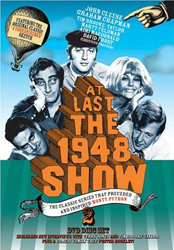 Synopsis: The Classic Series That Preceded And Inspired Monty Python

This historic, wildly silly series triggered a revolution that changed the face of TV comedy forever.

Bursting onto Britain’s small screens in an explosion of outrageous and often surreal sketches, At Last The 1948 Show featured John Cleese, Graham Chapman, Marty Feldman and Tim Brooke-Taylor. Produced in 1967, this recently discovered collection launched the Monty Python phenomenon and much like the affect of the Beatles on music, the world of comedy has never been the same.

eyelights: John Cleese. Graham Chapman. Ami MacDonald. the Pythonesque humour.
eyesores: the incompleteness of the set. the sloppiness of the direction and performances.

‘At Last the 1948 Show’ is a comedy programme that ran on British television from 1967 to 1968 for two series. It is most noted for being some of the earliest works of future Monty Python members Graham Chapman and John Cleese, as well as future The Goodies member Tim Brooke-Taylor, and for making a star out of Marty Feldman.

Unlike its contemporaries, ‘At Last the 1948 Show’ didn’t separate its skits with musical numbers. Instead, it featured hilarious little bridges with co-star Aimi MacDonald. These brief bits are absurdly self-obsessed (taking all the credit for the show, going on about how lovely she is, …etc.), which makes them extremely funny. Hilarious, really.

The rest of the show were sketches that have a raw -but undeniably- Pythonesque quality to them (in fact, many of them have been reused by the Python team in various contexts over the years). They also showcase the then-nascent comic genius of John Cleese, who had til then mostly done radio and performed in some skits on ‘The Frost Report’.

As I was reading up on the show for this blurb, I discovered that the episodes on this DVD set are actually not episodes at all; they are compilations of ‘At Last the 1948 Show’ sketches culled from whatever available sources there were at the time and edited together into “episodes”. To make matters worse, the sketches aren’t shown in their original order.

The thing is, in the (g)olden days of TV, studios didn’t always have the foresight of keeping records of their shows for reruns/syndication or home video (which didn’t exist at the time). The Brits, ever the most efficient people, regularly wiped their videotapes and reused them on other shows. And thus, many programmes are forever lost.

What’s frustrating here is that the packaging, courtesy of Tango Entertainment (the company has produced this set for the North American market) doesn’t say that these are a hodge-podge of bits from actual episodes. Instead, it suggests that they’re newly-rediscovered episodes – all the while riding on the coattails of Monty Python. Naturellement.

Still, at least we have these compilation episodes; better this than nothing.

Here are a few highlights:

Rating: 8.25 (would have been higher if the performances and production weren’t a bit sloppy).

On a sad note, Aimi MacDonald is joined by a bunch of other hostesses; it feels like a downgrade. And she’s better on her own; she’s certainly more vibrant, freer.

It’s unfortunate that ‘At Last the 1948 Show’ is only available in these compilations (which exist only due to having once been put together for Swedish television) because it would be nice to see it as it was intended. Thankfully, since then, much footage has apparently been found – amounting to nine full episodes, with only four remaining incomplete. So there is hope.

Either way, I had a really good time revisiting these compilations; there’s a lot of terrific material spread across the set. It’s not quite Monty Python, but you can see the beginnings of it here. So this is something I would definitely recommend to fans of the troupe. It also makes one intrigued about Feldman and Brooke-Taylor and their career, post-‘At Last the 1948 Show’.

I’m sure I will check that out at some point.