Synopsis: The Toro cheerleading squad has spirit, spunk, sass and a killer routine that’s sure to land them the national championship trophy for the sixth year in a row. But for newly-elected team captain, Torrance (Kirsten Dunst), the Toros’ road to cheer glory stumbles when she discovers their perfectly choreographed routines were stolen from a hot hip-hop squad across town. Now the squad must scramble to find a new routine to compete in this year’s competition.

eyelights: its principal cast. its infectious energy. its choreographies. its humour.
eyesores: its conventions.

Cheerleaders. I mean, really, can anything be more inane? A bunch of girls in limited attire, participating in suggestive group choreographies for the benefit of their home team while collectively shouting ridiculous cheers?

Based on what I’ve seen in pop culture, and in the media, cheerleading falls right in with other notable occupations like beauty contestant and “exotic” dancer. You need looks, some decent physical prowess, and…

It doesn’t help that cheerleaders are inevitably portrayed as vacuous partygirls and/or airheads. I’ve been branded with the opinion that, if I had a daughter, I would rather die than for her to join a cheerleader squad.

When I first picked up the DVD, back in the early 2000s, I worked in a local video store and I felt compelled to grab everything that came in so that I may have a sense of what our customers might like to rent or buy.

I never expected to enjoy ‘Bring it On’. I grabbed it because it was there, that’s all.

But, from its opening musical number, in which it tongue-in-cheekily poked fun at cheerleader reputations and stereotypes, all the while introducing the squad members, I was convinced that it was going to be something else.

And it didn’t let me down.

Though its core plot is all too familiar, Peyton Reed’s picture doesn’t take itself seriously enough that it feels trite. It’s essentially one part modern teen comedy and one part sports underdog story – with some twists.

For starters, it also tackles racial issues, in the form of the Toros’ rivals, the Clovers, whose routines the Toros’ former captain lifted. It not only pits black versus white, but also underprivileged with wealthy rich kids.

And it does so with sensitivity and intelligence.

It also defies some of the expectations of the genre and frequently does so for comedic purposes or to prove a point. You want a happy ending? Well, you’ll get it, but not quite in the form that you’d normally expect it.

Part of the picture’s success lies in the cast, which is quite stellar for both a teen comedy and a sports film: Kirstin Dunst plays Torrance, our lead, and is a very strong performer, capable of a wide emotional range.

She’s backed by Eliza Dushku as Missy, a tomboy acrobat who’s just switched schools and joins the squad with the support of Torrance. Dushku gives the character enough sass and spunk for the duo to have edge.

Gabrielle Union is Isis, the Clovers’ captain and Torrance’s rival. This girl takes no $#!t from anyone, but the attitude is justified. Personally, I was hit hard by Union and suffered from a small fancrush for years thereafter.

Finally, Jesse Bradford is a lot of fun as Cliff, Missy’s brother and Torrance’s paramour. In some ways, he reminds me of Sean William Scott, minus the goofiness – so he was rather enjoyable all things considered.

But what really makes the picture pop are the choreographies. Though these are not musical numbers (aside for the film’s bookends), the skill involved in coordinating and achieving these group moves impressed me.

These are not just cheerleaders waving their pompoms eagerly to the sound of lame cheers. No, these are full-blown extravaganzas that require precision and wit (as evidenced by the back-and-forth between the teams).

So ‘Bring it On’ not only had tons of laughs, but it also had moves. And, surprisingly enough, it had heart a-plenty, too – which makes it a far more multidimensional and entertaining picture than it really has any right to be

I’m not saying that it’s Masterpiece Theater, but it’s a quality teen movie that’s earnest enough to get past its genre conventions. Audiences willing to focus on where it colours outside the lines will find in it reason to cheer.

Nota bene: The picture has become enough of a cult hit that FOUR straight-to-video sequels were produced, as well as a stage musical. I haven’t bothered with them because this one’s cast and crew didn’t return. 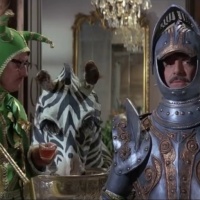