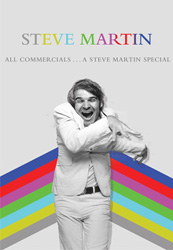 All Commercials… A Steve Martin Special 7.75

eyelights: the concept. its flow. its construction.
eyesores: its ’70s production quality.

“Ladies, there is now a product on the shelves that does away with that embarrassing… you know. It gives a girl confidence when her… you-know-what… needs a… you know.”

“All Commercials….” is a Steve Martin special that was produced for and broadcast on NBC on September 30, 1980. Like its title suggests, it’s a collection of skits and musical numbers that are all about commercials. As per Martin’s intro, it’s based on the notion that ads are more entertaining than the shows themselves, so why not do a whole programme of them?

Interestingly enough, this laugh-track “enhanced” 49-minute special was co-written by Martin with ten other writers, including Pat Proft (of the Zucker/Zucker/Abraham films). And, although he stars in it, he is not in all of the skits, sharing acting duties with a cast of approximately a dozen actors, including most notably Paul Reubens (who was also in ‘Comedy is Not Pretty‘).

I was really pleasantly surprised by the quality of the special and its ability to spoof so many different aspects of then-modern advertising. After the last two Steve Martin specials, which grew less and less funny as they went on, I was expecting a solid hour of drudgery. Instead, there were a significant number of clever and/or inspired moments throughout.

Even more surprising: I actually laughed. Many times.

It got off to a rollicking start with a spoof of those feminine hygiene ads that try to body shame women into buying their products, but are indirect in talking about what the product does – for fear of offending people. I always found them offensive because suggesting that women’s bodies are filthy and unfresh is sexist and grotesque (Gwyneth Paltrow take note).

There’s a large number of other interesting spoofs, like a used car salesman whose shtick is to attach himself to a lie detector to prove he’s honest (only to fail miserably at every turn!), an easy-open bra that was designed for women by men, or the grocery store interview of a couple intended to reveal the spouse’s surprising preference for side-dish, but which quickly devolves.

There are also ads for amusing spoof products, like skin-coloured toilet paper for men who are prone to cuts while shaving, or Truman Capote jeans. My favourite, however, is the plug for the Bag Boy School, with Paul Reubens as its proud spokesperson, telling us about all the wonderful opportunities that lay in wait for graduates upon completion of the programme.

To change things up, the special also throw into the mix delightful features such as a few of the best foreign commercials (including one for Accuris watches starring John Cleese), a rather good Robert Klein stand-up routine on advertisement, and even a couple of funny and silly musical numbers. There’s even a studio performance of The Dirt Band wedged in there for entertainment’s sake.

I was quite impressed with the pacing of the special, in that you’d think 50 minutes of advert spoofs would get old within 5-10 minutes, but the piece was cut together in such a way that nothing felt redundant and there were no slow bits; it’s quite well edited. I was also surprised by the scope of some of the set pieces, given that this is a ’70s television production.

Although it looks rather dated and some of its references are no doubt forgotten now, ‘All Commercials…. A Steve Martin Special’ is clever enough that it can still produce laughs. Its concept and format may not appeal to everyone, that’s for sure, but it would likely resonate with fans of sketch movies like ‘The Kentucky Fried Movie‘ and ‘Amazon Women on the Moon‘.

To them I offer a heartfelt recommendation.