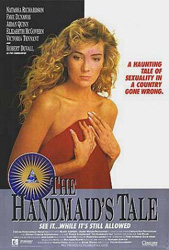 Synopsis: With a “cool eroticism, intelligence and intensity” (Playboy), this eerie futuristic thriller, based on Margaret Atwood’s controversial and critically acclaimed best-selling novel, is filled with “large themes and deep thoughts” (Roger Ebert). Boasting a phenomenal cast including Natasha Richardson (Nell) and Oscar® winners Faye Dunaway (Network) and Robert Duvall (Tender Mercies), this film “dazzles with its ingenuity and shocks with its outrageousness” (WNCN Radio)!

In the not-so-distant future, strong-willed and beautiful Kate (Richardson) possesses a precious commodity that most women have lost and most men want to control… fertility. Forced into a brain-washing bootcamp that turns fertile women into surrogate mothers for social-elite men and their infertile wives, Kate thinks she’s made out well when she’s assigned to an eminent party leader (Duvall). But when she learns that he’s sterile, she’s faced with the impossible choice: produce him an heir or die!

“We pledge allegiance to the Bible. The Old Testament shall be our sole and only Constitution.”

‘The Handmaid’s Tale’ is a 1990 motion picture based on the Margaret Atwood classic. Starring Natasha Richardson, Robert Duvall and Faye Dunaway, it was nowhere nearly as acclaimed as its forbear – and has virtually disappeared from circulation.

The setting is the near future, and it takes place in a United States run by a Christian theocracy. Now called the Republic of Gilead, this country has risen from the ashes of a health crisis that has made most of the population sterile due to pollution and STIs.

Our protagonist is Kate, a woman who is captured at the border by the authorities while trying to leave the country with her husband and young daughter. After her fertility and health are confirmed, she is forced into sexual servitude to the state, as a breeder for the elite.

‘The Handmaid’s Tale’ follows her story as she tries to navigate this treacherous, degrading, dehumanizing and demented new world.

I first heard of this picture when it played on television in the early ’90s. I knew nothing of Margaret Atwood then (and still very little now), but there was something about the picture that caught my attention – even though I only tuned in to the latter part of it.

I eventually saw it in full a decade later when I worked as a video store clerk. I had wanted to see it, and we happened to have a copy. It didn’t take long, but I was left unsatisfied with it; it felt dull, one-note. Perhaps I had expected something more dramatic or suspenseful.

One of the problems with the picture is that it feels tepid; beyond its core conceit (a brilliant one, I might add), there are not outstanding performances, no riveting turns of events, no excitement in any form… nothing. It comes off as a marginally decent television movie.

‘The Handmaid’s Tale’ is not an especially well-produced picture. In fact, the original director quit because he couldn’t get the producers to put his vision (which would have necessitated thousands of people for certain scenes) on screen. It is rather limited in scope.

There is also the issue of adapting a novel that is told from a first-person perspective (and with internal monologues) into a motion picture. There are reported issues between the screenwriter’s interpretation of the material and the others involved in the picture’s making.

Then there is the direction. Although Volker Schlöndorff is an award-winning director (notably for ‘Die Blechtrommel’), some of his choices in this picture smack of amateur hour, giving the result a second-rate quality that one often gets in straight-to-video productions.

A perfect example of this is in the opening segment, which shows Kate attempting to cross the border with her husband and daughter: it’s poorly-staged, like a bad TV movie. Instead of seeming heroic, the husband’s self-sacrifice looks like suicide and makes him look stupid.

We don’t even know what’s happened to her daughter. Although it makes sense that Kate doesn’t know, we should at least have gotten a sense of the chaos that made her lose sight of her daughter. Nope. The daughter is often seen wandering in the woods alone, calling for her mom.

…but we don’t know if it’s real, or just a figment of Kate’s paranoia.

Another perfect example, is this scene when the Kate and her fiesty friend meet in the bathroom late at night to talk, and her friend reaches out over the stall to connect with her. Richardson looks up well before the hand gets there, as if she expected it. Weak. And avoidable.

And yet, the movie still affected me. I credit Margaret Atwood, even though I haven’t read her book, simply because she created this dystopic world. No matter what was lost in translation, it doesn’t change the fact that the result felt all-too-real to me, much like ‘Children of Men‘ did.

I was fine after the viewing, but I woke up the following morning with a deep sense of despair: the current state of politics in Canada echo some of humanity’s darkest times, and those moments naturally (intentionally or not) served to inspire ‘The Handmaid’s Tale’.

For me, these close connections were too much. Consider the following:

And, as a point of reference, here are the fourteen defining traits of fascism: http://globalresearch.ca/articles/BRI411A.html

We’ve seen such things close-up before and it still happens in some countries. With the religious right intimidating the liberal left day-in day-out, it wouldn’t be surprising to see this happen. Again. And I despair at the thought that we would allow it to happen.

What’s the most stunning to me in this film is the hypocrisy of ramming Christian values down people’s throats, but not living by them – the way women are treated isn’t Christian at all. And the fact that the men expect “purity’ from women, but they have the freedom to do anything.

In real life, this is a consistent issue: most of the political scandals involve right-wing male politicians. There are exceptions, but we frequently find them preaching Christian values on the one hand and acting altogether differently in private. How can anyone support this hypocrisy?

I would feel so let down by such leaders by this point that I couldn’t help but turn my back on them. Christian values mean living as Christ would have lived. His message was a message of love and tolerance. And yet, intolerance, prejudice, spite, violence are often justified in his name.

There’s this scene in which the handmaids are compelled to hang one of their own in a “salvaging ceremony” because she has had relations with a man other than her owner. Then the man is thrown in their midst and is torn apart with their bare hands. All in the name of “moral purity”.

The most gutting part of the ‘The Handmaid’s Tale’ was the rape factor: Victims are humiliated, blamed outright and forced to repent for having misled men. The handmaids are essentially raped by their owners in a grotesque and humiliating “ceremony” – and forced to bear their children.

And in a society that has a burgeoning rape culture, it doesn’t even surprise me. Twenty years ago, I would have found this ghastly but far-fetched. Given all the reports we keep hearing about modern attitudes to rape (especially on campuses, of all places!), I can see it now.

In the film, all of this is justified in the name of religion. The handmaids’ servitude is qualified at one point as them having “freedom from” whereas they once had “freedom to”, and that they should not under-rate this gift of serving God. They’re the lucky ones, they’re told.

I bloody hope we never see another totalitarian regime take over in our lifetime, but we have been so lax to defend our freedoms that it could easily happen. We’re busy tweeting, consuming, being distracted by meaningless things while our rights are slowly being chipped away.

All in the name of religion – our own, or others’.

I really hope that we wake up before it’s too late. Our governments are using the fear of terror to control every aspect of our lives. Terror of other religions, it must be noted. Them vs. Us. Ironically, in the original book, Atwood chose Islamic extremists as the cause.

It’s not so far-fetched, as it turns out, and I would love to know what Atwood has to say about that now, thirty years later, seeing us sleepwalk into it. I, for one, want to wake up. I want to wake up from this nightmare. I want reason and knowledge to reign, not fear and ignorance.

“Those who would give up essential Liberty, to purchase a little temporary Safety, deserve neither Liberty nor Safety.”

Wake up. Someone please wake me up. 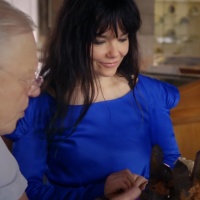