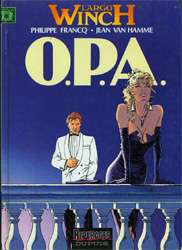 Summary: A secret power struggle is taking place behind the scenes of major financial groups. One of the techniques most widely used is the Public Offer, wherein a bidder proposes to acquire all available shares of a competitor at a fixed price to gain control.

In ‘O.P.A.’, the W Group is attacked by FeNiCo, a conglomerate of companies led by Gus Fenimore, a friendly old fox skilled at financial melees. Largo Winch and his associates must respond to an attempted takeover by his company. They fight fire with fire.

This volume of Largo Winch starts a new story arc, following the events of the first two volumes. By now, Winch is in full control of Groupe W and is maneuvering his way through the various traps that are set for him on the inside and on the outside. Thankfully, he is smart and brazen.

The book is exactly what I had expected at the end of the contrived mess that was volume two: it’s convoluted and nonsensical, eschewing logic for incessant twists, turns and thrills. In short, the writing is not exactly exemplary: Van Hamme (whose books this is based on) created a macho soap opera.

In this volume alone, Winch’ banking records are lifted, he is preyed upon by a young grifter, blackmailed by an aging actress, gets jailed, and has his life threatened by an eco-terrorist – who has also conveniently murdered an important shareholder in the company of Winch’s nemesis, starting a chain reaction of events behind the scenes.

All this in the matter of what seems to be a few days. Wow… must be hard being the richest man in the world, huh?

The art continues to plague the series. Francq just can’t seem to make anything look remotely realistic or appealing, and opts for teenager clichés (such as the “hot” women being blonde with perfectly round breasts that hold up without a bra). Even the coloring isn’t worth a damn, looking quite amateurish.

While I like the idea of a corporate thriller graphic novel series, I wish that Largo Winch would remain more grounded in reality. Based on what I’ve read so far, it’s far too influenced on ’70s and ’80s Hollywood action films – its basic premise is spoiled by unsophisticated, trite turns of events.

I’m astounded that the series has lasted as long as it has.