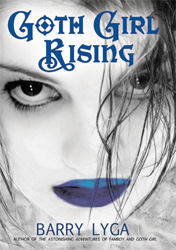 Summary: The sequel to The Astonishing Adventures of Fanboy & Goth Girl.

Time is a funny thing in the hospital. In the mental ward. You lose track of it easily. After six months in the Maryland Mental Health Unit, Kyra Sellers, a.k.a. Goth Girl, is going home. Unfortunately, she’s about to find out that while she was away, she lost track of more than time.

Kyra is back in black, feeling good, and ready to make up with the only person who’s ever appreciated her for who she really is.

But then she sees him. Fanboy. Transcended from everything he was into someone she barely recognizes.
And the anger and memories come rushing back.

After reading ‘The Astonishing Adventures of Fanboy and Goth Girl‘ I was really eager to read its follow-up, ‘Goth Girl Rising’. I had enjoyed the previous installment and found it a breeze to read, what with its short chapters and compelling developments. I couldn’t wait to get started.

Little did I know that this second chapter (in what appears to have become a series – more on that later), would be considerably longer, heavier, and difficult for me to relate to.

Whereas the first book was told from Fanboy’s perspective, the new one is told from Goth Girl’s point of view (hence the title). I would’ve thought that, given my penchant for girl power and goth culture, that I would naturally connect with her – especially since I seemed to understand her in the first volume.

Except that now, inside her thoughts, I really don’t get her: she comes off as erratic, emotionally unstable, a walking time bomb. Whereas I first thought that she was moody, with this book I can’t help but think of her as disturbed, perhaps even dangerous – something that hardly endears her to me.

The fact is that, as with many teenagers, she is completely confused. She doesn’t know what to make of her life, of her place in the world, doesn’t understand her emotions let alone know how to wrangle them, and finds the demands made of her impossible to meet for various reasons. Understandably, she’s edgy.

Plus which she just came out of a six-month stay in an institution. She’s frankly, and rightly, pissed. And since she blames Fanboy for the turns of events that landed her there, she wants to exact revenge on him. So most of the book is about her quest to get even, to wound him where it’ll hurt the most.

Hmmm… not exactly sympathetic, is she?

Now, it’s easy to understand her motives, as skewed as they are. But it’s veritably impossible to fathom the logic that she uses to justify her actions. She can’t even make sense of it herself: she’s constantly goading herself forward with the use of seething anger, even when she feels like doing otherwise.

Now, I’m a big fan of revenge stories (ex: ‘Darkman‘, ‘The Crow‘); I guess I have an everlasting chip on my shoulder. But those characters have been undeservedly wronged and the antagonists are clear villains. In ‘Goth Girl Rising’, there is a consistent impression that it’s all due to a miscommunication – and that the “villain” is anything but.

So I ended up slogging through it. Naturally, I found the way the story unfolds far less satisfying than the previous book, and was frequently frustrated with what our protagonist did or thought. And since it’s told from her perspective, there’s little respite from the whirlwind of misgivings at her core.

Having said this, the book had its moments.

For one, I liked that Lyga inserted a few reflections (read: diatribes) about female empowerment, body politics and the power dynamics of sex at about the midway point in ‘Goth Girl Rising’. To me, this was by far the strongest moment in the book: it posed excellent questions and offered a few interesting insights.

It doesn’t mean that I was overjoyed with the way that Goth Girl dealt with the situation, but at least there were some important discussions taking place about issues that matter. And, given that this book is likely meant to be read by teens, and most likely girls, this makes these reflections all the more significant.

Another thing that I liked was how Goth Girl (sorry, Kyra) ended up questioning the validity of what she held as true. I think that it was important for the character to examine herself and her beliefs, so that readers could see that imperfect models can make healthier choices for themselves – it’s just a matter of choosing them.

Unfortunately, I found that last part a tad contrived, as though Lyga either had a deadline to meet or didn’t know quite how to develop it. What took 350 page to unwind wrapped up in just a few, as though revelations come to people spontaneously and are equally quick to accept. Not so. Especially for the likes of Kyra.

‘Goth Girl Rising’ wasn’t an entire loss.  I enjoyed moments of it even as I had a difficult time getting into Goth Girl’s head. It has, however, diluted my enthusiasm for the series, so if another book is released, I may only tentatively approach it. In the meantime, I will simply content myself with Lyga’s ‘Goth Girl Follies’ cartoons.

Because, it appears that Goth Girl has picked up a following in the years since ‘The Adventures of Fanboy and Goth Girl’ was first published. There are new opportunities for expanding these characters – something Lyga never planned to do. And he clearly means to: remember those three things that Fanboy holds on to? Well, he finally told Kyra the third one.

But she never told us. No doubt we’ll find out soon enough… 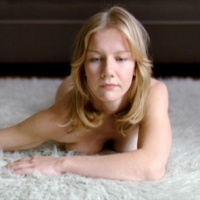 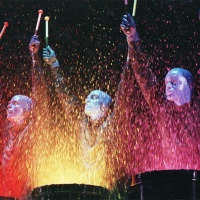 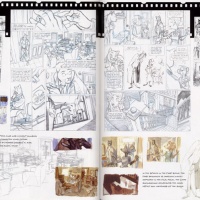