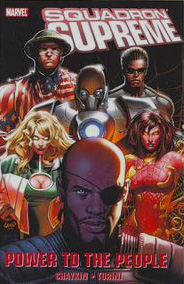 Summary: They were gods walking the Earth… powerful but flawed, they dreamed of remaking the world in their image. After their apocalyptic battle with Redstone, and after their terrifying fight with the Ultimate Universe, that dream has become a nightmare. While mankind struggles to rebuild, new heroes appear—and Nick Fury, left behind after the hit ULTIMATE POWER limited series, learns the shocking secrets of four astronauts who returned to Earth…changed. Join comics legend HOWARD CHAYKIN and newcomer MARCO TURINI to ask the question—whatever happened to the Squadron Supreme? Collecting SQUADRON SUPREME (2008) #1-6.

Squadron Supreme: Power to the People, by Howard Chaykin and Marco Turini 7.25

‘Squadron Supreme: Power to the People’ is a reboot of the Supreme Power/Squadron Supreme/Ultimate Power series that J. Michael Straczynski and Gary Frank developed. For reasons that escape me, Marvel decided to treat the series with little respect, changing its name, its tone and even going so far as to not completing it, letting it linger for a year before bringing it back in this new form.

One can only speculate as to why Straczynski and Frank didn’t return, but for this new iteration, Howard Chaykin and Marco Turini were brought in. I know nothing of either of them, but what I’m reading online isn’t exactly stellar. Chaykin is frequently described as a fallen star who scraped the bottom of the barrel with his efforts on this series, and Turini seems to be an unknown whose work here is oft-pilloried.

Sigh… it’s a darn shame, given the promise that this series showed in its earlier moments.

But it’s also a terribly unfair assessment of both of them. For my part, I don’t find that Chaykin’s work is that bad; I’ve certainly read worse and actually found ‘Power to the People’ relatively entertaining. But I also haven’t read his earlier work, so perhaps he was much, much better before. And it wouldn’t be so hard, because, to be truthful, this story lacks inspiration: it feels like a poor man’s take on what Straczynski was trying to do.

You see, Straczynski’ took the Squadron Supreme, a thinly-veiled copy of DC’s Justice League of America and tore down the pretense, making them clear models of the originals, but took them into a more realistic direction. He basically postulated what would happen if such characters arrived in a “real world” setting and then developed them to a logical end. I personally felt that it was as credible a series as I’d read in years.

Meanwhile, Chaykin decided to riff off of other known characters, now that the Squadron Supreme was conveniently out of the picture (thanks to an unresolved plot twist from Straczynski”s final days on the series). But he chose Marvel heroes instead and created alternate versions of them: Captain America, Hulk, Spider-man, The Fantastic Four, Iron Man and others get the treatment. And previous characters, morph slightly to fit this new continuity (such as Emil Burbank as Dr. Doom).

The problem here is that these new takes aren’t necessarily more realistic than the originals were; they’re just different. They also mostly look pretty lame, and are far from being able to match the predecessors. Furthermore, we don’t really need new version of Marvel characters. It’s a gimmick, and not an interesting one. What made Straczynski’s take on the Squadron enjoyable was that he took a disused property and gave it new life. he also did something with the characters that DC never would themselves.

But these new Marvel characters  are totally uninspired, as is the story, which is essentially about Nick Fury trying to round up these superpowered characters under his wing, to protect them from various government agencies, but also to rebuild the organisation he once worked for, S.H.I.E.L.D., in an alternate reality (this Nick Fury is from the ‘Ultimates’ continuity of Marvel).

Not that anyone explains how an otherwise “alien” character can take hold of power so quickly; you’d think that the US government would keep him under wraps. And, as one review deftly pointed out, not that it makes any sense for Nick Fury to work with a bunch of people who resemble superheroes he’s worked intimately with in his alternate reality and not wonder about it. Not even one bit.

I also had an issue with the way that the old characters were used. Arcanna, in particular, just does whatever and it goes unexplained. Because she can alter quantum realities (or whatever) she can do whatever she wants. And yet, despite that, she submits to authority, does lame circus-style tricks or generally sits around. With power like that, you’d think that she would do something with herself and not just goof off.

Still, I did enjoy seeing Burbank morph into Dr. Doom; it made sense in many ways. It’s just too bad that his alter-ego, Mister Fantastic, in this iteration, is Mister Lame: he’s not even remotely intelligent, let alone a match for Emil, but his powers (as are those of his team) are nebulous at best. We know that he can do something, but what is it? And what’s with their stupid form-fitting jumpsuits and bare feet? Change into something more comfortable, you fools!

Which leads me to Turini’s artwork. Seriously, I have no idea if he’s behind the character designs, but they’re ALL lame except for the spider-girl, who looks half-decent, if unoriginal. The rest all look like fifth-rate comic book characters from a tosser publisher who couldn’t publish a good book worth their salt. And this is Marvel we’re talking about here. At the very least, the character designs should be decent; there’s no excuse for lameness here.

If Turini was behind it and wasn’t  up to the task, Marvel should have gotten someone else to figure out the designs and then hired Turnini to work with what was given to him; there’s no reason to go ahead with a bad product that very few could improve without a complete redesign. Anyway, he may not be the cause, but it doesn’t change the fact that the books don’t look very good. And they get progressively worse.

At first, they’re not horrible; they’re serviceable, if slightly amateurish. But as we get to the fifth and sixth books, the art looks like it’s been drawn by a failed art student. There’s this one page that even had me laughing at it, because the facial expressions were so wrong that it was entirely risible. And don’t even get me started on the paneling, which wasn’t very good at all. Let’s just say that the storytelling was affected by it.

All this to say that ‘Squadron Supreme: Power to the People’ is a flawed book, but it’s not all-bad – there were some good moments here and there. I’m just curious to know what happened to such a promising series. It really feels as though Marvel had given up on it and were just trying to milk what was left of the potential franchise. If anything, someone managed to kill it. Whoever it was should be ashamed of themselves: Straczynski’s original vision was spot on, and the series should never have strayed.