Synopsis: Once upon a time in a castle high on a hill lived an inventor who’s greatest creation was named Edward. Although Edward had an irresistible charm, he wasn’t quite perfect. The inventor’s sudden death left him unfinished, with sharp shears of metal for hands. Edward lived alone in the darkness until one day a kind Avon lady took him home to live with her family. So began Edward’s fantastical adventures in a pastel paradise known as Suburbia.

‘Edwards Scissorhands’ is a fantasy film. It may not seem like it at first glance, given that it mostly takes place in a caricatured version of suburbia, but it exists in a space that is neither reality nor pure imagination – like all fairytales before it, it is inspired by reality, but merges it with a fantastical morality tale.

It also offers a main character who simply cannot exist in a real-world setting: in this case, our lead is manufactured from a cookie-making device and was given a human form. The only problem is that his inventor died before he could give him a pair of hands – Edward is stuck with a set of scissors in lieu of proper appendages.

As strange -if not scary- as this may make him appear, Edward’s heart is delicate and pure as snow; he is but a child in the body of a young man. Alone, and afraid to face an outside world that he’s never explored before, he lives on his own in the inventor’s now-abandoned castle, creating topiary masterpieces with his sheered hands.

…until a good-natured Avon salesperson (plays with the usual pained expression by Dianne Wiest) finds him there, that is.

From this point onward, Depp was on my radar: he imbued Edward with a naïveté and innocence that seems so genuine, so heartfelt, that I was completely taken with the character, the performance, and the film. Even though the character has limited emotional range, Depp made us empathize with Edward, he made us care for him.

Depp’s acting skill would be fully demonstrated in ‘Benny and Joon’, but already he was immersing himself in his roles and breathed life into them. In this case, he managed to make a machine-man feel real, despite maintaining an air of artificiality through his facial expressions and his staggered, Charlie Chaplin-esque walk.

Personally, I had never seen such a peculiar-looking character before: goth culture was uncharted waters to me, so the obvious Robert Smith and bondage gear influences were completely lost on me. I also had yet to see ‘Hellraiser’, and ‘The Crow’ was years away, so this character appeared completely fresh to me. To me, Edward was a standout character in fiction of all kinds.

Little did I know that this was inspired by Tim Burton’s own inner turmoil. Not unlike many teenagers, Burton felt like an outcast in his community. If anything, Edward is a stand-in for Burton.

That was also part of the appeal for me: I related with Edward’s feelings of awkwardness in a world he didn’t understand and that, in turn, also didn’t understand him. ‘Edward Scissorhands’ was an expression of my own experiences.

Of course, the film’s appeal goes well beyond the central figure of Edward himself.

In particular, there’s the social satire, wherein Burton has fun skewering suburban “culture” by painting everything pastel-coloured (oh, what ghastly neighbourhoods he’s envisioned!), heightening everyone’s superficiality (most of the women are vacuous gossip-mongers and the men are closeted bigots) and having them all partake in the clichés of the classic “American Dream”.

Burton clearly had a bone to pick with these people: he made everything about their lives appear even more fatuous than it probably is in reality. As Edward is immersed in this new lifestyle, we see through his confusion and simple-mindedness the absurdity of it all – what seems commonplace and “normal” for most of these suburbanites is unusual and oft-times irrational to him and us.

In fact, although Edward is the stranger in this land, he is made to seem the most grounded of the lot. Granted, he’s most certainly not your average human being (whatever that is), but he comes off as the least ego-centered, pretentious and selfish individual in all of that bonbon suburban nightmare. As far as I’m concerned, he’d be one of the only people worth knowing there.

Thankfully, he has found a few sympathetic allies in Peg (Dianne Wiest)’s household:

Firstly there’s Peg herself, who takes him under her wing and pretty much mothers him. Sadly, her good intentions are obscured by a lack of foresight and understanding of human behaviour. But she tries her best, and that’s what counts: Edward hasn’t known any kindness except for that brief time with the inventor.

Then there’s Peg’s husband, Bill, played with the perfect amount of smugness. Arkin, of whom I’m no big fan (‘Grosse Pointe Blank‘ excepted), manages to turn him into a subtle caricature of the suburban dad, confidently talking down to Edward, keeping court like a king in his castle, and putting up Christmas decorations for the whole neighbourhood to see. He means Edward well, but he is careless and can easily be distracted.

There’s the son, Kevin, who sees in Edward a big freak that he can show off to all his friends. He is just a kid and really doesn’t mean any harm at all. He’s just taken in by the novelty of having Edward around and will no doubt eventually turn to newer, more exciting things in time. For all intents and purposes, Edward is a brand new puppy to him. Nothing more. And who would hurt a puppy? Certainly not Kevin.

And last, but not least, there’s their daughter, Kim, as incarnated unsteadily by Wynona Rider (Depp’s partner at the time). She is a morally ambiguous cheerleader who is dating a big macho goof (played against type by a suddenly bullish Anthony Michael Hall), but sees purity in Edward. After their initial encounter, which was a disaster to say the least, she eventually falls for him. And he for her.

This was obviously Burton getting a little sentimental, letting his own high school fantasies come to the fore: that the young man’s heart would be seen through all his layers of inadequacies and that he would find love. It’s a cliché, but it’s nonetheless a pretty thought: one would want the world to work that way, one would wish that beauty would come from inside and act as a beacon.

But that is not always the case in real life, and this is where ‘Edward Scissorhands’ eschews traditional Hollywood endings. Instead, Burton turned to classics such as Universal’s ‘Frankenstein’ film as inspiration for the finale; there would be a bittersweet quality to the way he wraps it up, but it’s by no means a happy ending for all involved.

Even though things don’t go entirely well, it’s nonetheless a satisfying turn of events: Edward remains pure throughout and never loses any of his sweetness and charm, life goes on almost as if nothing happened, and a wistful quality imbues the film and its characters.

This is due in no small part to Danny Elfman’s score, which is breathtakingly dreamy, providing a fairytale-like quality to the proceedings, making one instantly nostalgic. It is by far the best score that Elfman has ever put together – a stand-out in his now-massive motion picture oeuvre.

But it is clearly Burton’s extremely personal vision that inspired everything here and that makes ‘Edward Scissorhands’ what it is. That and Johnny Depp, of course. But, if not his own experiences and his ability to convey his feelings on-screen, we wouldn’t have been privy to such a cinematic gem.

It’s a darn shame that he hasn’t been able to repeat this in his later works. Burton is a visionary, but without such a heartfelt touch, his films often feel emotionally barren, like exercises in style more than anything else. ‘Edward Scissorhands’, however, is -and will likely remain- a quirky, but touching, modern classic.

One response to “Edward Scissorhands” 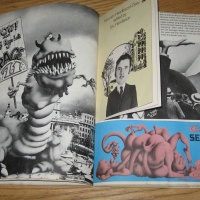