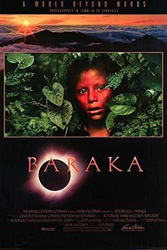 Synopsis: In the ancient Sufi language, it is a word that translates to ‘the thread that weaves life together.’ In the pantheon of modern cinema, it remains one of the most unique and acclaimed motion picture events of our time. Shot in breathtaking 70mm in 24 countries on six continents, Baraka is a transcendent global tour that explores the sights and sounds of the human condition like nothing you’ve ever seen or felt before. These are the wonders of a world without words, viewed through man and nature’s own prisms of symmetry, savagery, chaos and harmony.
***********************************************************************

Roger Ebert said it best: “If man sends another Voyager to the distant stars and it can carry only one film on board, that film might be Baraka.”

‘Baraka’ is an epic, and spiritual, experience. Without actors, dialogue, or even narration, this film weaves together a series of images from around the globe and manages to capture the beauty of earthly existence as well as the tragedy of human disconnectedness.

It’s a supremely well-constructed film. It takes us on a journey from the tranquility of nature to inner peace to humanity’s quest for divinity to the detachment of modern life to the dehumanization of the human race itself to war and out of the darkness to the light again.

All with only images and sound.

The cinematography in this film is breath-taking and some of the images leave the viewer’s mouth agape and engrave themselves into permanent memories. The aural experience is, frankly, one of the most poignant ones I’ve ever had. Seeing it on the silver screen (it’s semi-regularly shown in local arthouse cinemas) is mind-blowing.

In my mind, one the best films ever made. Period. It’s pure cinema, at its best, and it should be seen at least once by everyone.

NB: ‘Baraka’ should be seen BIG and LOUD – it’s not made for the small screen and in poor listening conditions. The latest Blu-ray edition is the highest-end transfer made on the format thus far and is considered by many to be the ultimate audio-visual experience – with a decent screen, sound system and properly calibrated equipment, that is. It’s pretty much a demonstration disc for geeks.