Synopsis: One Tiny Change…And The Future Is History.

If you change something in the past, will it affect the present? “Yes!” says this eye-filling, time-travel thriller based on the classic Ray Bradbury story and directed by Peter Hyams (Timecop, End Of Days).

Take 9 parts of ‘Jurassic Park’, mix it with 1 part of ‘Stargate’, put the mixture in the first available time machine, shake vigorously and what do you get?

Boy… I was mostly bored, despite the decent pacing and interesting premise; I just didn’t care and was looking forward to the credits. *yawn*

As for the science… well, it was probably more rooted in fiction than they intended, due in part to severe lapses like returning to the same point in time continuously without meeting up with previous versions of themselves. Duh…

By the way, how did Edward Burns transform himself from a promising indie filmmaker into a poor man’s Ben Affleck? 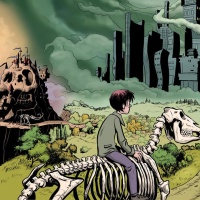